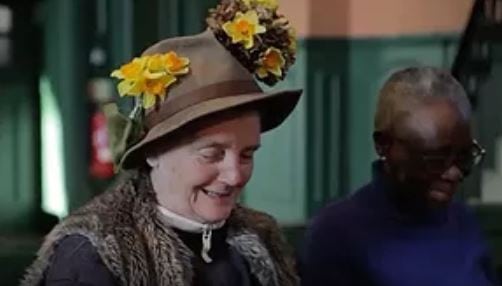 Sponsored walks, swims and cycles are all common ways of raising money for charity. Now there’s to be a sponsored hymn-singing marathon at St Michael and All Angels Church in aid of the church organ fund and the church’s three chosen charities. Unlike sponsored walks, swims and cycles, the focus is not on the individual participant, as you sponsor the hymn rather than the singer by going to the Just Giving page here and selecting the hymn of your choice. The idea is that anyone who wants to can just drop in and sing for a bit, to sustain the core congregation and singers from St Michael and All Angels’ choir, Chiswick Choir, the Hogarth Singers, St Peter’s Southfield Road, Our Lady of Grace, St Michael’s Elmwood Road and St Saviour Wendell Park and children from local schools, as they make their way through all 542 hymns in the New English Hymnal overnight from 12.00 noon on Friday 3 March till sometime after 6.00 pm on Saturday 4 March. Children are particularly encouraged to take part in the ‘Christmas hour’ between 1.00 and 2.00 pm on Friday 3 March, when the hymns will include Away in a Manger, O Come All Ye Faithful, Silent Night, O Little Town of Bethlehem and other popular carols. The church has done this twice before in its history, when the most popular hymns proved to be number 368 – Guide me, O thou great Redeemer and number 427 – O praise ye the Lord! Praise Him in the height. Breakfast, tea and cake will be supplied, and Bread of Heaven no doubt.

I’ve just come back from a week’s filming in Zimbabwe for The History of Africa documentary series with Zeinab Badawi (due to be transmitted on BBC World TV in May). We’ve been to 11 countries in three years and it’s completely changed my outlook on all things African.

This was the last trip of the series and we will now be head down editing in post production. You don’t realise how much the news agenda of disaster, war, famine, poverty, disease and corruption seeps in to your mind and shapes your thinking by reinforcing the old dark continent concept of Africa as a place to be frightened of, until you spend time travelling around it meeting people. Yes there’s poverty, disease and corruption and Africa has had more than its fair share of disasters, war and famine, but they’re not uppermost in the minds of the majority of the people as they just get on with living their lives. We’ve met African archaeologists and academics, hunters, fisherman, farmers, artists, religionists, people driving camels across the Sahara, wedding parties, game wardens, shop keepers, people from all walks of life. Mostly they’re cheerful, optimistic, open and very pleased that someone is taking an interest in their history.

The last night we spent in Zimbabwe we had dinner with the crew and their partners. The black couple: the cameraman and his wife who is a radiologist working at the desperately under-resourced children’s hospital in Harare while doing her PhD part time in London. The white couple: the sound man whose family were booted off their farm in 2000 without compensation and his wife who is descended from colonialist administrators. Both couples had spent time abroad and could live in the UK or the US if they chose. The cameraman was selected for President Obama’s Young African Leadership programme and has been offered an internship with Warner Brothers in LA. The soundman and his wife spent eight years in London where she worked in the City as a high flying accountant and he built up a successful production company. They chose to come back to Zimbabwe to raise their children.

Cameraman and sound man choose to stay in Zimbabwe and work together, where they are leading the way in the country’s fledgling film industry, because they see hope for the future. What I take away from this is that Africa’s future is not all bleak, it is on the rise and its young professionals are doing their best to improve the quality of life in their own country. Contrary to popular opinion, not everyone wants to move to the UK.

It never ceases to amaze me how you can live somewhere for nearly thirty years and still have no idea about half the things which happen in your own neighbourhood. I was invited to Brentford FC Community Sport Trust’s anniversary bash at Watermans last Tuesday, celebrating 30 years of engaging young people and providing support for disadvantaged groups through sport and education in West London. We heard from the chairman and a sponsor and the CEO Lee Doyle, and impressive though all the talk of social inclusion and community cohesion was, I confess that my thoughts were turning toward supper until up popped Samantha Silver, a very calm, self-possessed middle aged woman who had the room spellbound as she described how, as a group of parents in Richmond, they had tried and failed to introduce their autistic children to the joys of team sport.

She approached the trust, who took on the challenge. On their first meeting the coach brought a sack of balls and laid out cones for the kids to weave in and out of. One child promptly disappeared up a tree while her own son carefully collected up all the cones into a nicely ordered pile. The default position for an autistic child when faced with the anxiety of something as socially daunting as team sport is apparently to lie on the ground with their arms over their head in a foetal position. Even the most dedicated, specially trained coach, as theirs was, might have been forgiven for having second thoughts. He didn’t. She described how slowly over the years the children, now young people, have gained in confidence, to the point where they actively enjoy the sessions. She explained also how the training had affected their behaviour at home and taught the parents a thing or two which had contributed to a calmer, more positive atmosphere both at home and at school. She also told me afterwards how, heartbreakingly, while this works with younger children, by the time they get to secondary school their anxiety is too great to overcome with this sort of coaching. The trick is to get to the children young. The good news is that her charity Action Attainment, which runs the On the Ball scheme, has just got funding to extend their project from Richmond into the boroughs of Ealing and Hounslow. For details of Action Attainment go to www.action-attainment.com

Reading the brochure with renewed enthusiasm after hearing her speak, I can tell you that Brentford FC Community Sport Trust is one of the leading community organisations linked to a professional football club. It employs 100 staff and volunteers and ‘has evolved into an award winning, innovative charity that uses the power of sport to engage its community in positive activity’. In 2015/16, over 11,000 participants engaged with the Trust through its broad range of programmes.

The Department of Transport has launched the Public Consultation on the expansion of Heathrow. Transport Secretary Chris Grayling has outlined a number of measures with which Heathrow Airport Ltd will have to comply in order to get development consent, including support for communities affected by expansion including noise insulation for homes and schools and improvements to public facilities.

Throughout February and March there are a number of opportunities to go and meet transport officials and talk to them at venues in Ealing, Putney, Hounslow, Hammersmith, Richmond, Isleworth and farther afield. Now is the chance to find out details of how it will affect you and give your view.

What Heathrow has to do in order to get Government consent

Over the next 16 weeks there will be a series of public meetings at which the public are invited to speak to officials and ask about the draft Airports National Policy Statement.

These are the nearest to Chiswick: