“All readers come to fiction as willing accomplices to your lies.” That’s the “basic goodwill contract made the moment we pick up a work of fiction” according to American writer of short stories, Steve Almond. If that’s the case, Chiswick is full of liars and their accomplices.

Whether it’s someone primarily known for doing something else, who has written a memoir or writes as one strand of a varied career, like Clare Balding, Al Murray or Sheila Hancock, or someone whose success comes purely from their talent as a writer, like Sadie Jones, Colette McBeth or Paula Hawkins, Chiswick has an abundance of writers.

This Wednesday (15 March from 7.00 pm) Anna Kerfalk, manager of Waterstones, is hosting a local authors evening to which everyone is invited, whether you write or just read. Among those talking about their work will be best-selling author Alice Peterson, whose latest book A Song for Tomorrow is based on the true story of singer and songwriter, Alice Martineau. Alice died in 2003 at the age of 30, shortly after the release of her album Daydreaming, recorded with Sony. When she was born her parents were told she wouldn’t live beyond the age of ten, as she had the genetic condition Cystic fibrosis. Over the period of her life medical knowledge improved. She overcame considerable health challenges to graduate from King’s College London with a first-class honours degree in English and as she entered her twenties she fell in love and embarked on a dual careers as a model and as a musician. Jo Whiley championed her music, playing it on Radio 1 and Robbie Williams described her as “an inspiration”. Alice told me she felt privileged to know her family and to be able to write her remarkable story.

Chiswick has other opportunities for those who like to read. Book clubs flourish. There’s one which meets at the Tabard pub once a month (tonight, Tuesday 14 March at 7.30 pm as it happens) which is reading its way through the Guardian’s 1,000 Best Books list and votes each month on which ones to read next. You can sign up here if you’re interested.

I’ve also just heard from Sarah Wah, who is setting up a business called Living Room Literature, which she describes as ‘literature classes for adults delivered in my own home’. Sarah is a qualified English teacher with years of experience working in universities and schools, currently teaching at St Paul’s Girls’ School where she is also deputy head of the English department. Her business idea was born when a parent said “I’d love you to teach me!” So she’s running a couple of courses from mid May on the Brontes. You can get in touch with Sarah by email: sarah.j.wah@googlemail.com and this is her website.

I imagine her living room is much like mine. A friend of my daughter’s, coming to our house for the first time and peering through the window from the street, clearly unused to seeing a whole wall of real books in anything but a bookshop, sent her a text asking ‘Is yours the house with the book wallpaper?’

The world’s gone mad. It’s a sentiment which has been expressed often since 23 June last year and even more so since President Trump was elected. In Chiswick we have two Labour MPs in an area which votes largely Conservative. On the Brexit bill they voted against their party the first time round and supported their party on Monday (while themselves remaining consistent) in line with what most of people in Chiswick want, even though for the most part they didn’t vote for them. Clear?

The Brexit referendum was largely about the sovereignty of the British parliament. As I started writing this MPs were voting on the two amendments made by the Lords to the Brexit bill: that Parliament should have a vote on whatever deal the Government finally makes with the EU on our departure (aka the sovereignty of the British parliament) and that the rights of EU citizens living in Britain should be guaranteed before Article 50 is triggered. Now both Houses have passed the bill, without either amendment.

The first time the EU Withdrawal Bill was voted on by MPs, Labour backed the Government. This time round, Labour told its MPs to vote against the Government. Same bill. The only difference in it was two amendments made by the Lords, that unelected body which Labour has long campaigned to get rid of and the Conservatives have defended.

I haven’t spoken to Rupa Huq, but I have heard from Ruth Cadbury, MP for Brentford and Isleworth, whose constituency contains large parts of Chiswick, and who has voted consistently against the bill. The first time she was a rebel and got a slap on the wrist from Labour whips. This time she voted in line with her party and, she believes, with the wishes of her constituents, who voted 60% for Remain.

Guaranteeing the rights of EU citizens

On the first amendment she says:
“European citizens living in the UK make a huge and valued contribution to our economy and society. As well as working in business, many EU citizens are employed in our public services – including the many thousands who provide care to our sick and elderly. Our cultural life has undoubtedly been enhanced as a result of European citizens deciding to make our country their home, and our university sector benefits enormously from EU students and researchers… EU nationals should not be used as bargaining chips”.

On the second amendment she points out that the Government has already conceded that parliament will get to vote on Brexit, quoting David Jones MP, Minister for Exiting the European Union, speaking in the House of Commons on 7 February:
“… what I am committing to from the Dispatch Box, is that before the final agreement is concluded—the final draft agreement, if you like—it will be put to a vote of this House and a vote of the other place. That, we intend, will be before it is put to the European Parliament.”

Throughout the discussion of Article 50, the debate has been on whether a parliamentary vote would be ‘meaningful’ or whether it would be engineered in such a way to be merely window dressing. On this she says:

“Our successful Labour-led amendment to the Bill seeks to formalise these promises. It would also ensure that Parliament is able to express its view should the negotiations lead to no deal being reached with the EU. Labour is clear that no deal is the worst possible deal, and would not be in the national interest. This amendment would ensure there is a truly meaningful vote at the end of the Article 50 process”.

Party politics seems increasingly confused in this country. The uncertain future facing EU nationals in Britain and the anxiety that causes is one of the most unpleasant consequences of the Brexit vote. I have to say I admire Ruth for taking a moral position on this, irrespective of the impact it may have on the rest of the negotiations or on her own career prospects. 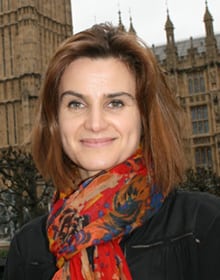 I had an email this week asking if I knew whether anyone in Chiswick is organising a Big Lunch event on the weekend of 17 / 18 June to mark the anniversary of Jo Cox’s death. I am not aware of any plans but have undertaken to try and find out.

In the eight months since her murder our once proud multi-cultural society seems to have unravelled a little more. Her killer was a far right extremist, a white supremacist who repeatedly shot and stabbed during the referendum campaign her while saying: “This is for Britain”, “keep Britain independent”, and “Britain first.” The Leave vote seems to have given all the nutters permission to come out of the woodwork.

I remember only too well the National Front skinheads in our neighbourhood in Bristol spreading their poison in the seventies. I haven’t belonged to a political party since I was 18 but used to enjoy the odd Anti Nazi League march. I’m not big on street parties and bunting but the idea of Chiswick declaring itself a racism free zone by supporting the Big Lunch and by extension the Jo Cox Foundation is something that appeals to me.

So what is a Big Lunch? The idea is to have a community event involving food, which may or may not be a street party and may or may not decide to raise money for charity at the same time. It represents the coming together of three groups: the Eden Project, a lottery funded group which aims to ‘improve the happiness and wellbeing of people across the UK by helping to build more resilient and better connected communities’, The Big Get Together, launched by Jamie Oliver and the Duchess of Cornwall last month in honour of Jo Cox and the Jo Cox foundation, set up to continue her work for ‘a fairer, kinder and more tolerant world’. What’s not to like?

If you’re thinking about organising a Big Lunch event in Chiswick or know someone who is, please email me at info@chiswickcalendar.co.uk or Katie Kurilecz at the International Refugee Trust, which is based in Chiswick. They are looking to organise a Big Lunch event one or help anyone else who’s trying to do the same. kkurilecz@irt.org.uk / 020 8994 9120.