Image above: Chiswick Business Park, where the American International University will be situated

The American International University in London, which will be moving into Chiswick Business Park in July, is looking for opportunities for its students to do voluntary work.

From charity shops to Chiswick House, Chiswick’s many charities and not-for-profit organisations offer all sorts of opportunities for volunteering, so the influx of young people who will be attending classes at the university’s new campus from September may provide an answer to the perpetual problem of finding help.

President and Vice Chancellor Phil Deans told The Chiswick Calendar as a liberal arts university they expect their students to spend part of their time doing voluntary work as part of their broad based approach to learning. They also arrange internships with companies for their students and are on the look-out for opportunities for both volunteering and internships in Chiswick.

Image above: CGI of how the university campus will look

“We hope the impact we have on Chiswick will be positive, on not just in terms of the impact on the bars”

The university, which is celebrating its 50th year this year, is currently based in Richmond and is moving to Chiswick for more space. Being situated in the business park puts them in the perfect location for arranging work placements. This is the time of year when students usually apply for internships.

“We are really looking forward to moving in. We’ll be unpacking boxes from July, with the first students through the doors in September” he told me.

“We hope the impact we have on Chiswick will be positive, on not just in terms of the impact on the bars.

“We would like to get to know our neighbours and would like people to get in touch with ideas of how we might contribute to the local community.”

Image above: CGI of how the university campus will look

The university was founded in 1972 as away of offering Americans opportunities to study abroad, but over the years it has evolved.

“In the 1990s it became increasingly British” says Phil.

“People choose it because it’s in London”, he says, “they love the idea of its internationalism.”

Though it has become increasingly British, it retains the American style broad-based first year, in which students are required to take ten core curriculum courses  alongside courses relating to their chosen subjects.

‘By exploring a wide range of subjects, it enables students to gain a broader perspective of the world around them, developing their intellectual curiosity. It also makes for a much more diverse student experience, working with students taking other subjects in a truly multi-cultural, international learning environment.’

Image above: Lanterns in the trees at Chiswick Business Park for the Chinese New Year; photograph Jennifer Griffiths

The university has a virtual open day on Wednesday 23 February from 4 – 6.30pm. It has launched an initiative to widen participation and attract more students from Hounslow. The university has reconstructed its first year as a foundation for British students who do not have A levels and there are some scholarships available.

Students are not expected to be living in Chiswick. There is no accommodation on campus and the university is in negotiation with several large housing providers, one of which is in Hammersmith. 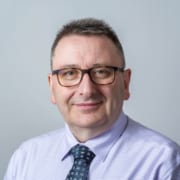 Professor Deans is not what I expected at all. He is not American, but from Newcastle. The first generation of his family to go to university, he took the opportunity to go and study in China in 1983 and stayed two years. When he graduated he won a scholarship to Japan.

He has taught at SOAS, the School of Oriental and African Studies, and run an American university in Japan. He plans to welcome visitors to Korean and Chinese seminars and food evenings once they settle in to their new premises.

For more information, go to The American International University in London (Richmond) website.