The Chair of The Friends of Turnham Green, Rebecca Frayn and member of the committee Karen Liebreich have both resigned from the residents’ group, putting the future of the organisation which has made many improvements to the Green over the past 14 years in doubt.

The anonymous donor, who promised £5,000 for tree planting on the Green has rescinded their offer. They have honoured their commitment to pay £2,000 for the cherry trees, which have already been bought, but will not spend the further £3,000 they had promised for other types of tree which were to have been planted on the south side of the Green.

Cllr Joanna Biddolph has now issued a press statement on why she stopped the planting of 10 non-fruiting cherry trees to fill in the gaps in the existing avenue of cherry trees. One of those who objected to the planting has also issued a statement.

But the fate of 16 trees (ten intended for the avenue plus another six fruiting trees intended for elsewhere on the Green) remains uncertain, as they languish in a depot in Hounslow. Karen Liebreich says Abundance London is still trying to ensure that some of the trees are at least planted in Chiswick. The trees are several metres high, with large root balls and need to be planted somewhere soon.

Resigning as chair of The Friends of Turnham Green Terrace, Rebecca Frayn slammed the decision by Cllr Joanna Biddolph to block last week’s planting, calling it ‘a precedent which completely undoes the democratic principles that underpin our purpose as a Friends group’.

‘Who would have thought that the offer of 10 free cherry trees could create such a storm of outrage and upset amongst such a vocal minority?’ she wrote. ‘I’ve scratched my head over how to be King Solomon, held a number of meetings, and it is apparent that the dissenters have no interest in working constructively to resolve things. Most disappointingly of all, amidst all the storm of petty in-fighting in which this tiny minority have become so embroiled, the far more pressing issues of how we as citizens can contribute to mitigating the climate crisis and supporting our declining wild life by urgently planting more trees has been tragically cast aside’.

‘But once a tiny minority, supported by Councillor Joanna Biddolph, successfully blocked our planting day last Saturday, despite the overwhelming vote in favour of the tree-planting at our well attended AGM, it became apparent that they had now set a precedent whereby a motion passed by a majority of our members will only actually be implemented if that vocal minority, together with Councillor Biddolph happen to agree with it. A precedent which completely undoes the democratic principles that underpin our purpose as a Friends group. I very much hope a King/Queen Solomon can be found to take the Friends forward now’. 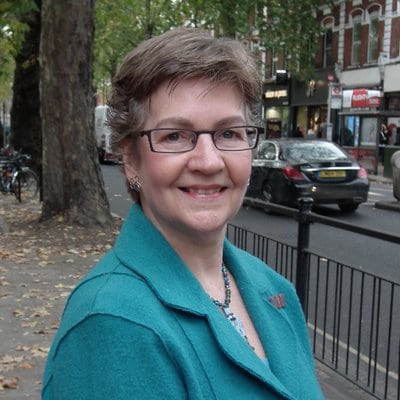 The row erupted after a decision was taken at the Friends’ AGM in January to plant cherry trees to fill in gaps in the existing avenue of cherry trees on the north side of the Green. There was some discussion about whether or not a donation for the planting of trees should be spent on cherry trees. Jill Spencer raised the objection that fallen cherries were messy and commented that she had ruined a pair of shoes walking through them.

Karen Liebreich, a member of the group’s Landscape Committee, was called a ‘dictator’ for saying she was only interested in planting cherry trees in that avenue, as opposed to any other kind of tree. In the end the meeting voted 21-7 in favour of cherry trees and ten non-fruiting trees were bought to go alongside the pathway, with an additional six fruiting trees to be planted elsewhere on the Green.

Cllr Biddolph was at the AGM on 14 January. She wrote to Hounslow’s Head of Parks, Stefania Horne, last week, and then to the leader of the council Steve Curran, to demand that the planned planting on 15 February was stopped. It was cancelled on Friday afternoon and some volunteers turned up expecting to help with planting on the Saturday.

‘We are sorry that the planting event was cancelled at such notice’ she says in her statement.

‘The issue was never as simple as voting percentages. It was about the decision-making process before and at the AGM which had not been made democratically’.

She does not explain in her statement what she means by this.

‘Later, members of FOTG’s landscape committee contacted us raising concerns about the decision-making process leading up to and at the AGM and providing background information that gave the issue more weight. As councillors, it is our duty to take up concerns raised by residents and to ask officers to investigate.

‘The request was to postpone the planting so discussions could take place’.

‘We look forward to hearing about the suggestions the FOTG landscape committee makes later this year for the long-term ecology, biodiversity and enjoyment of Turnham Green’ she adds.

You can read her full statement here.

Crossed wires in the Landscape committee?

The ‘background information that gave the issue more weight’ appears to be that the Landscape committee were not separately consulted before the AGM.

Rebecca and Karen were both members of the Friends’ Landscape committee and both in favour of filling out the cherry tree avenue with new saplings. Another member of the landscape committee, Jan Hewlett, also wrote an email saying:

‘I like the cherry avenue especially in spring. I suggest at our next AGM … we might ask people what they would like and where. Let’s try to keep up the democratic approach’.

But a fourth member of the committee, Jill Spencer, complained that she was not consulted before the AGM. She raised the issue with Cllr Biddolph. In her statement she says:

‘I raised my concern about the lack of openness and democracy over the tree planting project with our local councillors. Although being a member of the landscape committee, the first time I heard of the plan to plant more cherry trees was when it was presented by Karen Liebreich at the Friends’ AGM in January’.

‘In my request to ask Hounslow Council to delay any planting until this autumn, I made suggestions to look at the wider picture when the trees are in full leaf, and develop a clear planting plan considering all the options for suitable trees, and the possible sites available to work around the many conflicting uses of the Green.

‘I stand by my request to ask Hounslow Council to delay the planting of more cherry trees, pending a wider community consultation based on a clear holistic planting plan. It’s really about the long-term future of the Green and making considered decisions about how best to enhance and improve it for future generations to come’.

Photographs above: Flowering cherries in the streets of Chiswick. Photograph by Jon Perry.

The future of the 16 cherry trees is at present uncertain. They need to be planted somewhere because they’re too big to be ‘heeled in’ temporarily.

Rebecca is a film maker, with her new film Misbehaviour, starring Keira Knightley, about to open in cinemas next month. She is also an environmental campaigner and pointed out in her statement:

‘New research estimates that a worldwide planting programme could remove two-thirds of all emissions from human activities, a figure the scientists have described as “mind-blowing.” As a result the WWF, the Woodland Trust, The National Trust, The Wildlife Conservation Society, and BirdLife International – amongst many other august bodies – are calling for schemes like these to be urgently implemented.  Hounslow are about to roll out a wonderful borough wide tree planting scheme. Please let’s all bear the larger environmental picture in mind and get behind it!’

Commenting on the cherrygate debacle on social media, Dr Edward Seaton says 16 cherry trees would have absorbed half the CO2 produced by a car in a year. According to an article published in the journal Forestry in 1999 from the Institute of Terrestrial Ecology in Midlothian, Scotland, he says:

‘The number of widely spaced wild cherry trees needed to absorb the carbon produced by the average car in a year is 32 … Surprisingly real world emissions from cars has not much changed since then, perhaps because larger cars are more fashionable.

‘If, as the article states 16 cherry trees had been planted, they would have absorbed about half the CO2 produced by a family car per year and would have done the equivalent of this every year for about 45 years (and also looked quite nice)’.