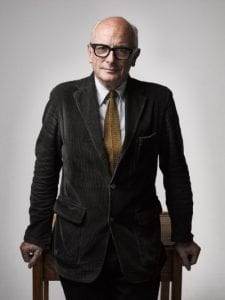 Bedford Park resident Peter Murray has been awarded an OBE in the Queen’s Birthday Honours list. Peter is ‘curator-in-chief’ at New London Architecture, an independent forum for discussion, debate and information about architecture, planning and development in London which he co-founded with Nick McKeogh.

He is also a ‘design advocate’ for the Mayor of London and as such has some influence in the Mayor’s office on policy concerning the development of housing and the urban environment in London.

“I am very pleased” he told The Chiswick Calendar. “When I heard from the Cabinet Office that I was going to be awarded one I was expecting it would say that it was for ‘services to architecture’ but it also mentions city planning and the work I’ve done for charity, so I am very pleased about that”.

Peter has long been an advocate for London and the importance of good design in urban public spaces. He recently funded workshops to develop design ideas for the future development of Turnham Green Terrace, with better pavements and attractive seating and planting, which is now being considered as part of LB Hounslow’s public consultation.

The OBE citation is for ‘leadership in the arts, architecture, city planning, design, publication and charity,’ which he says “nicely describes the various passions in my life and reflects the breadth of the work carried out by New London Architecture.

“As a keen group cyclist I am well aware of the benefits of drafting behind the efforts of others and I am very grateful to the teams at Blueprint, Wordsearch, London Festival of Architecture, Club Peloton and New London Architecture who helped me arrive at this point.” 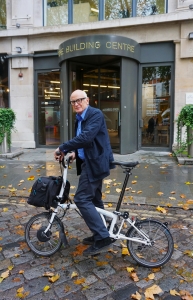 Carrying on the tradition of William Hogarth

His charity work includes setting up an annual cycle ride across France, which raises between quarter and half a million pounds for the children’s charity the Coram Foundation.

When we asked him about his charitable work, he said he was particularly proud of this, as they are now the largest single donor to the Coram Foundation since William Hogarth, Chiswick’s most famous resident and an early supporter of the Foundling hospital, as it was then.

Peter plans to celebrate the news of his OBE with a family barbecue at home this weekend, but he tells us it will be some time before he gets to go to the Palace to pick up his medal, as he’s been told Covid has put the award process very behind.

Peter Murray, who studied architecture at Bristol University and the Architectural Association, has spent most of his career writing about, commenting on and teaching architecture rather than practising it.

He was technical editor of Architectural Design magazine, then editor of Building Design and the RIBA Journal. He founded the design and architecture magazine Blueprint in 1983 followed by Tate magazine and Eye, the international review of graphic design. He started Wordsearch, the global communications consultancy specialising in architecture and real estate.

He founded the London Festival of Architecture, which began life as the Clerkenwell Architecture Biennale, in 2004. With Nick McKeogh, he launched New London Architecture in 2005 as London’s independent membership organisation for everyone with an interest in London’s built environment, with a clear purpose to improve the quality of people’s lives by making London a better place to live, work and visit.

Peter curated major exhibitions at the Royal Academy including New Architecture: the work of Foster, Rogers, Stirling in 1986, Living Bridges in 1996 and Beyond Minimalism, the work of Tadao Ando in 1998. Peter has written numerous books including The Saga of Sydney Opera House, Building Passions, Architecture and Commerce, and The Leadenhall Building. Until recently he was a Visiting Professor at the IE Business School in Madrid.

He is a keen cyclist and in 2006 started Cycle to Cannes, an annual charity ride across France, with architects, developers and consultants.

In 2013 he rode 4,300 miles across America and the UK raising money for the Architects Benevolent Society and Article 25. He was a finalist for the London Cycling Campaign’s Cycling Champion of the Year 2015, is a member of the Construction Industry Cycling Commission and Chairman of the Bedford Park Bicycle Club.

Peter is regularly listed as one of London’s 1000 most influential people by the London Evening Standard and is included in Debrett/Sunday Times 500 People of Influence.

He is Chairman of the London Society and the Temple Bar Trust, former Master of the Worshipful Company of Chartered Architects and Member of the Court of Assistants.  He is a member of the The Athenaeum Club and the City Livery Club. He is a Board member of BeFirst, the regeneration delivery company for Barking and Dagenham, and of the Association of Architectural Organisations.