Staff at Chiswick School have this week started administering coronavirus testing to its staff and students. Education Secretary, Gavin Williamson announced on 15 December that secondary schools would be required to provide mass testing for students from the beginning of the Spring term. They’re using the Lateral Flow Tests, the so-called ‘Rapid’ tests which give a positive or negative result in 30-40 minutes, without having to be processed in a laboratory.

The tests are being used in schools to help identify people who have high levels of virus who do not have symptoms and would not otherwise come forward for a test. Rapid Covid testing centres for the general public have also been set up at two sites in Hounslow and are soon to be set up at three more.

Staff in schools have worked hard over the Christmas holidays to transform sports halls and gyms in order to welcome students and staff back more safely.

As schools broke up for the Christmas holidays they were still expecting to have all their students back in the first week of term. After Christmas the policy changed to a staggered start, and then on 4 January, the first day of term for many, the Prime Minister announced that it had changed again, that the whole country would be going into a national lockdown and only pupils considered ‘vulnerable’ and children of key workers would be going into school from the start of term.

Amid these changing expectations they have had to learn how to set up testing booths and how to administer the tests at the same time as scheduling remote learning for students who would not be present in school. The Armed Forces offered support for setting up the testing operation, in the form of a telephone hotline and testing equipment was delivered on 4 January.

‘Chiswick School were fortunate to benefit from the expert advice of the Public Health England team working in Hounslow, who have provided support to all schools throughout the pandemic. Other secondary schools in the borough had previously taken part in a pilot testing scheme. The close network of headteachers have worked together to learn and understand the safest and most effective way of developing their testing strategies’ said Laura Ellener, Head Teacher at Chiswick School.

The site team at Chiswick School built the testing centre in less than a day and senior members of staff undertook training that morning with testing commencing on the afternoon of 4 January. All staff and students who came to school on Tuesday 5 January were tested and said they felt much safer and reassured knowing that everyone in school would be free from the virus. 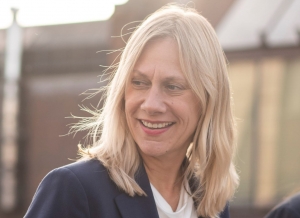 “I am very proud of the school’s ability to get this up and running so quickly; this is down to the willingness of staff to go above and beyond. I sent my mum a photo of our testing site, which she was delighted to see; she was especially surprised when she realised those administering the tests were in fact members of staff as opposed to Healthcare Workers.”

Along with administering the lateral flow testing, Chiswick School also began teaching remotely, delivering all year groups full timetables through live lessons from Tuesday. All students have been provided with a laptop where needed and the school continues to support vulnerable families through its fundraising initiative.

“We have a number of children and families who need our help, especially those whose parents have lost their income, suffered a bereavement or have very ill family members”.

No contingency plan for exams from Education Secretary “disappointing”

Laura Ellener said: “We are also now supporting our Year 11 and 13 students who have been told that examinations will no longer take place, currently with no clear plan about how this will be managed. It is disappointing that a contingency plan had not already been developed and communicated by the Education Secretary as this causes great uncertainty for students and their families.”

The school is reporting that over 95% of its students are joining in with the live lessons and that they will continue to provide a full timetable and support those children in school as well as running a mass testing site. Over the next week, Chiswick School will also be opening its doors to local primary school staff to offer them the opportunity to have a test. This will further support children, families and school staff to stay as safe as possible.

Positive results from people who showed no symptoms

To date, the school has already identified positive lateral flow test results and the individuals concerned were then asked to have a PCR test, as per Government guidance. Deputy Head Jane Mills said:

“It was very interesting as the individuals had no symptoms whatsoever; if we hadn’t had access to the testing, the consequences of these individuals passing the virus on could have been catastrophic. We have the children of doctors and nurses at school and if they were to have been effected, they could have then passed this on to their parents. It is so important that parents and carers keep their children at home if they can, even if only one is a key worker, as this will protect the NHS and stop families becoming unwell.”

If you wish to donate to the Chiswick School vulnerable children fund; details can be found on the homepage of the school’s website: