Image above: David Juritz playing at the Chiswick Flower Market in May 2021

David Juritz is standing in the local elections in May as a candidate for the Green party. David is a professional musician whose career as a soloist has taken him all over the world. He is considered one of the most versatile violinists currently working in the UK, dividing his time between solo performances, chamber music and directing.

A long time resident of Bedford Park, he raises money for charity and has played at the Chiswick Flower Market, to support its endeavours to bring people to shop in the High Rd, but he is standing as a candidate in Isleworth rather than Chiswick “because they asked me” he said. Isleworth has the most active group of Green Party members in the borough. 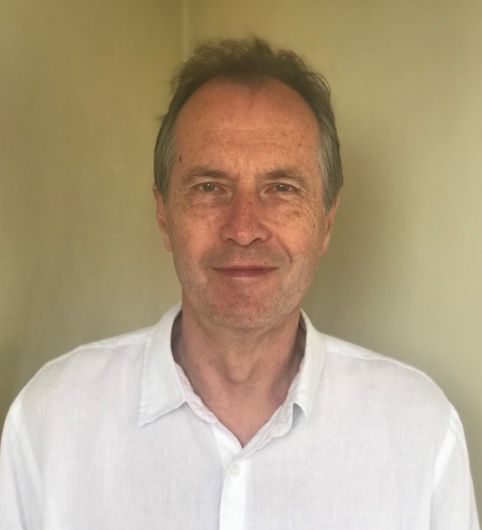 “I’ve been a member of the Green Party for about as long as I have lived in Chiswick – since about 1985 06 ’86” he told The Chiswick Calendar.

“We all know we’ve only got one planet and we have to look after it. I was worried then about the environmental degradations, the extinctions and as we’ve learned more about climate change my concern has grown.

“Joining the Green party is one way of expressing those very deep concerns.”

The obvious question always put to Green candidates at every election is whether or not it’s a wasted vote, given our electoral system.

“I think about that every single election” he told me. “Generally I’d say voting Green is never a wasted vote because we need to send a signal that environmental concerns trump everything else and there is political gain to be had by acting on environmental issues.

“It can be very frustrating. We might lose battles but our children need us to win this war.”

On the Cycle lane he said he realised that it had been deeply divisive and had very good friends on both sides of the argument but it was important to change the culture.

“It means less confident people will cycle and that’s good – it’s a very efficient and clean way of travelling.”

David rides a bike himself and finds it’s the most efficient way to get around London: “You know exactly when you’ll arrive.”

And the idea that there is more congestion because the High Rd is narrower and traffic has to stop every time a bus stops to pick up passengers? And that makes for more air pollution rather than less?

“It doesn’t. What adds to air pollution is the number of cars. We all have to think carefully about the need to use our cars. If there are fewer cars on the roads then people who really need to use cars will still be able to.”

How does he feel about Low Traffic Neighbourhoods?

“I live on a very busy road which is used as a cut-through. I’d be delighted if it were made a Low Traffic Neighbourhood.

“I have two children who are young adults, and I feel a huge responsibility.”

Image above: David Juritz playing at the Chiswick Flower Market in May 2021

“My carbon footprint is not one to be proud of”

As a professional musician who travels the world to perform, he is very conscious of his own carbon footprint and feels guilty about it. Born in South Africa, he has just been back there to perform and also to see his mother, who he had not seen for two years.

“My carbon footprint is not one to be proud of and I am trying to cut down on flights. I also own a car and sometimes I need to use it if I am playing out of town and have an early morning session the next day, but I don’t use it much.

“I think there should be a progressive tax on flights”.

His next concert is very local. He plays with the London Tango Quintet, who have a concert at St Peter’s Church, Acton Green on Saturday 12 February.