A “geyser” of ‘waste water’- diluted sewage – erupted on the north bank of Hammersmith Bridge on Sunday (25 July), following heavy rainfall across London.

The jet of water was filmed shooting well over 100ft into the air out of an overflowing storm drain, before falling back onto the surrounding area or dissipating into a fine mist close to pedestrians crossing the bridge.

“This is crazy! #HammersmithBridge right now. Reminds me of #Geysir in #Iceland. Apparently this also happened two weeks ago when we had this much rain falling in such a short period of time.”

Members of the public speculated about the cause of the spurt of water on social media, with one claiming it was a burst pipe.

‘The vent point is from a storm sewer which also takes away excess surface water from roads and streets. It was working as it should and was at full capacity last weekend due to the torrential rainfall, meaning air pressure built up in the system which needed to be vented.

‘This resulted in waste water being pushed out – wastewater is water from the sewers which is very heavily diluted by the rain.’

Severe flooding occurred across London, yet no sewage overflow notifications 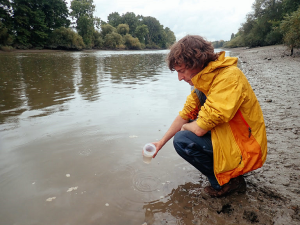 Theo Thomas is the Chief Executive of the London Waterkeeper charity which fights for fishable, drinkable and swimmable water.

On the Hammersmith geyser, Theo said: ‘We’ve seen the intense rainfall of recent weeks put the sewer and drainage systems under great pressure. London has paved over green spaces 22 times the size of Hyde Park in a generation. This combination means the infrastructure is under greater pressure and is less resilient than we need it to be.’

Theo has been campaigning for an automated system which tracks overflowing storm drains and is widely accessible and disseminated online. Prior to the heavy rainfall yesterday, Theo complained that there were no alerts on Thames Water’s manual notification system (@ThamesCSOAlerts).

He added: ‘It feels like Mogden Sewage Works & Hammersmith Pumping Station should be overflowing to the Thames after this rain. No update on the feed though. That could be because it’s a manual system, not automated. Unlike Copenhagen, where they’ve had real-time alerts for almost 20 years.’

See also: Raw sewage in the Thames is ‘unacceptable’

See also: Gap opens up along the tow path at Strand on the Green

Specialist workshops to celebrate Chiswick Flower Market’s one year a...