Hundreds of thousands of pounds paid for non-existent puppies

Interest in buying a puppy has soared this year, and with it so have puppy scams. In September the BBC reported that puppy prices had shot up during the coronavirus lockdown, with puppies often selling for £3,000 or more. Seizing their opportunity, those who would prey on others were soon capitalising on the lucrative market.

According to scam-busters Action Fraud, the scammers have been using the lockdown restrictions as an excuse to explain why prospective buyers couldn’t go and see the puppy they were buying. Instead they’ve been persuaded to part with a deposit and then more money for insurance and delivery.

Action Fraud says the money paid out for non-existent pups runs into hundreds of thousands of pounds.

Chiswick residents Charlotte Pendred and Boris Pomroy told The Chiswick Calendar how they fell foul of a classic puppy scam, paying money for this adorable cockerpoo they were destined never to meet. 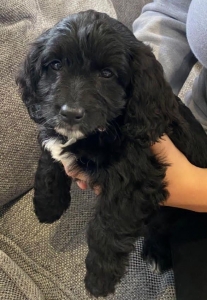 Charlotte and Boris have three children, aged eleven, eight and five. Now seemed as good a time as any to buy a family dog, so they started searching for a puppy.

After several weeks of searching and not finding quite what they wanted, Boris put an advert on a reputable pet finder website.

“We’d had various conversations and backed away from them because they didn’t feel right” says Charlotte.

When someone answered their advertisement, sending photographs and videos, Boris even did an internet trace to try and ascertain whether the pictures had been taken from another website.

“He spoke to the guy and he won him over”.

The puppy was nearly nine weeks old and still with its mother and siblings apparently. They talked about such things as injections. Boris paid a £200 deposit against an asking price of £900 and they were supposed to go and get the puppy, who the children had named Leo, from Birmingham. Boris bought the pup a travel cage and a bed and all the accoutrements any self respecting Chiswick puppy might need.

They’d arranged pick up for a Sunday and when the seller rang to say he had a buyer for one of the siblings in London, so he would bring them both down, Boris didn’t think anything of it. When he asked for more money and Boris refused, the deal began to unravel fast. 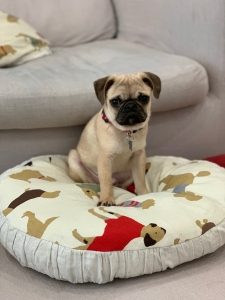 Eventually the seller said he would refund the money, but then he just stopped responding to calls. The children of course were upset and Boris felt bad that he’d been the agent of their disappointment.

Fortunately this tale has a happy ending. Charlotte says two weeks on they have a puppy – a real one, who they have also named Leo.

“Our eldest had always wanted a pug. Leo is five months old and we’re very happy with him”.