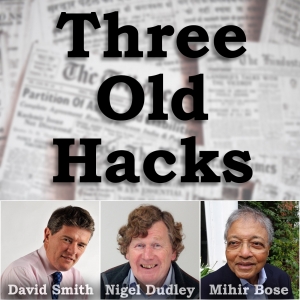 Mihir Bose – former BBC Sports Editor, David Smith – Economics Editor of the Sunday Times and political commentator Nigel Dudley have been friends since they first met while working at Financial Weekly in 1980s. They have kept in touch regularly, setting the world to rights over various lunches and dinners. With coronavirus making that impossible, what do journalists do, deprived of long convivial lunches over a bottle of red wine or several? Why, podcast of course.

As trade talks with Europe sink into the mire and the clock ticks down to the end of any formal partnership with the EU, the Three Old Hacks look at Europe and where it all went wrong.

Mihir thinks it’s all to do with Britain never having got over the loss of the Empire. Considering the “ridiculous talk of Britain having been enslaved by the EU” he recalls meeting Nelson Mandela, having coffee with him in his house in Soweto and understanding what it really meant to lose your freedom.

David considers the part played by journalists in making the EU the whipping boy for any and all political and economic failures. Remembering how his generation were brought up on films in which Kenneth More singlehandedly destroyed the Nazis, he regrets that the story of EU triumphs, not least the preservation of peace in Europe and the transition of Eastern European countries to democracy on the collapse of the Soviet Union, were never properly told.

Nigel remembers working with Boris Johnson on the Telegraph under the editorship of Max Hastings, with Boris “spinning fantasies” about Europe from his office in Brussels.

They recall the glory days of journalism before computers, dictating their prose to copy takers (“is there much more of this? I’m due a tea break). Even with rose tinted bifocals they admit this lost world of journalism was not always as glorious as it is sometimes portrayed.

Chiswick Reconfined – ‘Twas the blog before Christmas
Scroll to top