The Annual Fancy Dress Parade has been a highlight of the Bedford Park Festival for over 50 years.

This picture, taken back in 1980, prompted the question: where are they now? And did they grow up to be a lollipop man, racing driver, or cow girl?

James Taylor,  holding the Stop sign just right of centre, decided against a career as a lollipop man, choosing instead a life in academia as he explained when we caught up with him in the USA 41 years on. He’d settled in Ohio via St Andrews University, Scotland,

“I loved my time there, and the academic experience convinced me that I really needed to spend my life doing philosophy. Of course, I might have contributed more to the sum of human happiness by becoming a lollipop man, but from a purely selfish perspective, teaching and writing philosophy was far more fun!”

James lived on Blenheim Rd as a child in the 1970s and into the very early 1980s and believes that that picture shows his very last Green Day, and the woman working the Farah Fawcett hairflip was the daughter of the celebrity who opened the festivities that year, Magnus Magnusson.

“ Bedford Park was very different then than it is now–this was when it was still rather run-down and louche. Bedford Park was a magical place in which to grow up – the nearby TV studies and the area’s continuing artistic reputation, and affordability, meant that it was home to TV stars such as Richard Briers, which made local kids like myself feel very sophisticated as we spotted “people on TV” around. It didn’t hurt that Mr. Briers was also incredibly friendly. Now I’m older I can appreciate things I had no understanding of as a child, such as living down the street from where Yeats wrote, and walking streets painted by Pissarro.”

“ In the 1970s there was still a “rag and bone” man with a horse-drawn cart who appeared occasionally calling for “Old iron, any old iron,” James recalls.

“We moved in the early 1980s so my brother and I could attend grammar schools outside London. From there, university at St Andrews, a year studying at the University of California, Berkeley, then a PhD in philosophy from Bowling Green State University in Ohio–I’d decided to go into academia and there were far more jobs in the US than the UK. I now teach and write Philosophy in New Jersey (at a liberal arts college, The College of New Jersey) just outside Princeton. A far cry from Bedford Park in the 1970s!”

Turns out, James’s special interest is applied ethics and he is known for pushing the boundaries in libertarian thought, especially with his arguments for the commodification of human organs, votes and parental rights. And he has the unusual claim to fame that The Times once branded him a heretic! # James is now finishing a book which argues (in part) against the view that there should be markets in votes and admits, “Sometimes my past views turn out to be wrong!” 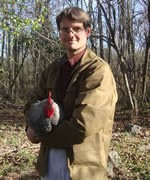 James now lives with his wife and daughter on a former dairy farm.

“We’re slowly renovating the Victorian farmhouse, we now have almost-working plumbing, and are bringing the farm itself back into production; in addition to domestic cats and dogs we have chickens and bees also rare-breed ducks and critically endangered turkeys–Beltsville Small Whites, the original commercial Thanksgiving turkey from the 1930s and 1950s.”

James, who enjoyed taking part in Green Days, was once presented with a prize by the actress Hayley Mills, for his costume of playing cards, and still has fond memories of the festival,

“I loved Green Days as a child, and I’m delighted that this continues! I’d love to attend another Green Day–maybe next year, when things are a bit more normal.”

Where are the Green Days Children?

Where in the world are the other Green Days children now? We know of another with a US connection –  Charlotte Borger lived locally in the 1970s and sent some of the pictures in from that time of her and her brother Julian, who also grew up in Bedford Park. Julian is The Guardian’s world affairs editor, and was until recently their US correspondent.

Do get in touch, if you have any stories to tell of Green Days, we’d love to hear from you.

And, of course,  come along to this year’s Fancy Dress Parade on Saturday 12 June. It’s free to enter, and all children 10 and under are welcome to join in. Just come along dressed in the theme of The Animal Kingdom and register at 10.15am at St Michal & All Angels Parish Hall. And take lots of pictures, we might be giving your children a call in 40 years’ time!

# In a review of his book Stakes and Kidneys: Why markets in human organs are morally imperative in The Times’ “Science Notebook” August 29, 2005 claimed that his position was “heretical.”

What makes a winning photograph?