Ealing Council officers have confirmed that the promised January review date of the contentious Fishers Lane traffic scheme will now be pushed back till February.

Chsiwick’s Lib Dem councillors, who represent Southfield ward, have been pushing for the closure of Fisher’s Lane to all vehicles but buses to be discussed at a full Cabinet meeting. They have carried out a survey of Southfield residents and organised a public meeting at the beginning of December to enable local residents to give their feedback on the scheme. They managed before Christmas to get the issue on the first Cabinet meeting of 2021.

Since that was decided, London has gone into Tier 4, Ealing is facing very high levels of Covid-19 infection and serious pressure on its hospitals. 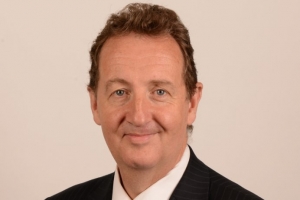 “The NHS is reporting serious issues in hospitals as Covid-19 infections have risen sharply in London and the UK in December. In Ealing our current case rate for the week up to 25 December is 623.5 per 100,000… up by 32%, the fifth highest rise in London since the previous seven days. This has led to increased demand for hospital care”.

Councils are also having to deal with supporting secondary schools in introducing mass testing for pupils.

Image above: Cllr Andrew Steed beside the railway bridge in Fisher’s Lane

“A kick in the teeth”

The Lib Dem councillors still think there should be time made to discuss the Fisher’s Lane scheme, which has been controversial and aroused a lot of opposition. Liberal Democrat Southfield Councillor Andrew Steed said:

“The Julian Bell-led Ealing Council delayed review date is a kick in the teeth for Southfield residents. It delays the chance for facts to be presented to Ealing Council about how most people think the scheme does not work. Liberal Democrats have less disruptive alternatives that need to be discussed and have consulted with residents at the Southfield Ward Forum meetings and using surveys.”

Councillor Steed added: “Labour is using the ‘covering their ears’ strategy to the Fishers Lane scheme by arrogantly claiming “It’s not a referendum” with regards to listening to residents’ views. Ealing Labour’s contempt of the people, it is supposed to serve, is deplorable. Schemes that have such a wide impact to local residents deserve to have the facts heard and reviewed urgently.”