Even small increases in physical activity among those who are the least active can bring great health benefits. As the former Chief Medical Officer noted:
“The potential benefits of physical activity to health are huge. If medication existed which had a similar effect, it would be regarded as a ‘wonder drug’ or miracle cure”.

I gave a short presentation to the Chiswick Area Forum a couple weeks ago at which I called on the Councillors to support measures which are to be introduced by both the Local Council and the GLA to improve the Air Quality and the Street Scene in Chiswick. This is how I prefaced it.

We know that Air Pollution is at an all-time high in the London Borough of Hounslow as a whole and not least in Chiswick. This is in part because we are close to Heathrow Airport but also because the main A4/M4 corridor all the way from Wales continues through here, effectively cutting Chiswick in two and making getting across from Grove Park to the High Rd for local residents a huge headache; traffic flows from the A316 which use Sutton Ct Rd as a main route through to the High Road and beyond compound the problem.

Along with Pollution which is killing thousands of Londoners year on year there is an increase in obesity and diabetes brought about by inactivity. Walking and cycling in traffic calmed and quieter roads would improve the health of so many, thereby saving the NHS millions of pounds each year.

This photo shows the result of all this traffic and how the High Road looks on a Sunday – note how the cycle lane is totally covered in parked cars and how a bus is stuck west bound. Instead of a pleasant space making walking, cycling and eating al fresco an enjoyable experience it is one of Pollution – both air and noise. 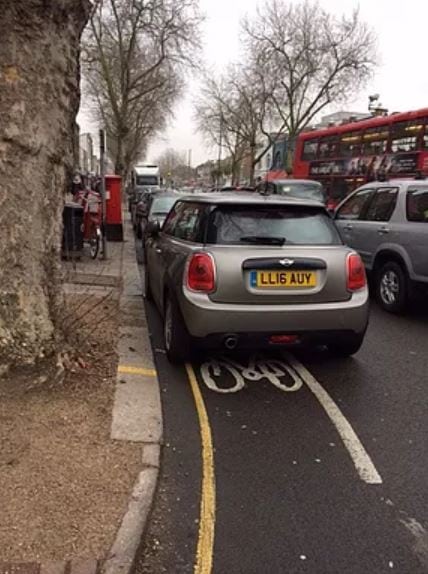 I have lived in Chiswick for forty years, since 1976 and have always cycled – in the 70s and 80s it was a normal thing to do. As time went on car ownership increased along with school choice meaning the school run came into being.

In 2002-3 I was part of a team of parents at both Belmont Primary School and Chiswick Community School working with the teachers on the ‘Safe Routes to School’ scheme which had been introduced by the Government of the time and to which every school had to sign up. Surveys were carried out with the pupils and up to 70% said they would like to cycle if they could. Unfortunately very little progress was made before the scheme was disbanded in 2010. In spite of the reintroduction of the scheme recent efforts have been unsuccessful. Amusingly, my son who was cycled to school every day as a child once asked if I could be a ‘normal’ mother and drive!

Unfortunately there is push-back from locals who defend their right to drive to school, to have parking very accessible and also from businesses who believe that they only survive if people can drive to shop. The result is that very few parents cycle with their children to primary school and very few pupils cycle to secondary school unaccompanied. It is very noticeable that in school holidays the roads are so much quieter, proving that much of the traffic is the school run. The health of our young people is very poor compared to their European counterpoints because effectively they rarely walk or cycle.

Shopping trike instead of a car! 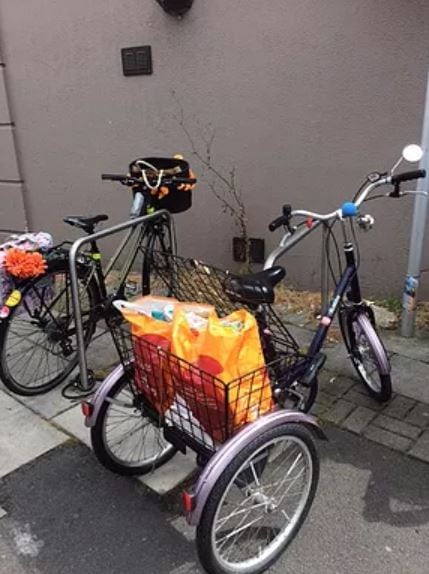 Whenever cycling is mentioned as a means of getting about and reducing motor vehicle capacity is mooted in favour of safer cycling and walking infrastructure the word ‘disabled’ pops up as an argument against any such measures I’m always told that ‘not everyone can cycle’ and ‘what about the disabled?’. Well here is an example of how a mobility impaired person finds cycling infinitely the best way to get about and to shop locally.

The bike on the left is mine – often seen up and down the High Road as I do my shopping. The trike on the right belongs to a woman in her late 60s who has had back surgery and can only walk with two walking sticks and with great difficulty. She uses the trike to shop – her shopping was seriously heavy – and her cat basket when she needs it, fits on top of the cage. She told me that she mostly uses the pavement because drivers are very impatient and the biggest difficulty she encounters is when people park across drop down kerbs preventing her from crossing the road. A recent tweet from a trike user said: “I have bilateral hip dysplasia and four years ago I bought a tricycle and it has changed my life”.

The GLA has just published a list of measures for consideration by London Boroughs with some ‘high priority’ actions. These measures appear within the Council’s own document ‘Hounslow’s Air Quality Action Plan. Initiatives such as Very Important Pedestrian Days (eg. no vehicles on certain roads on a Sunday), ‘Reallocation of road space; reducing parking at accessible destinations and/or restricting parking on congested high streets and busy roads to improve bus journey times, cycling experience and reduce emissions caused by congested traffic.’ To see the Mayor’s Transport Strategy click here.

Car ownership and driving has increased in this part of the Borough contrary to current trends in London. The new breed of 4x4s are so big they are wider than the newly widened parking bays making streets incredibly difficult for those who walk and cycle to navigate. The massive increase in Uber, PHVs and Delivery vans using Satnav and Waze now proliferate in small residential streets as the drivers endlessly try to find quicker ways to get from one end of Chiswick to the other. All this can deter people who would like to walk and cycle and creates an unpleasant environment instead of that which could be such an attractive High Street and all the streets beyond.

Chiswick benefits from having three tube stations, two Overground stations and one mainline station, not mention at least eight regular bus routes and a night bus negating the perceived need for car use.

These photos of people cycling in Holland show what can happen where streets are traffic calmed and space is given over to walking, cycling and al fresco eating spaces. 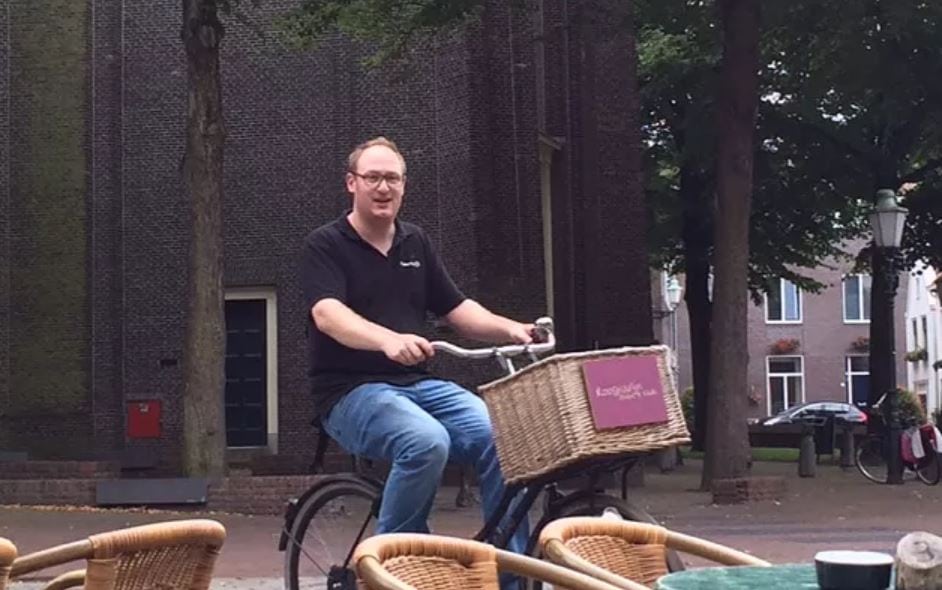 It could be so wonderful if only we are prepared to give it a go and to realise just how dirty, noisy and polluted our High Road is currently and how it could be transformed.

Spotted on the riverbank

Chiswick in Pictures
Scroll to top