Image above: Head teacher Laura Ellener with a pupil at Chiswick School (library picture taken before the pandemic)

Education Secretary Gavin Williamson announced last Thursday (17 December) that the return to school after Christmas would be ‘staggered’. The Chiswick Calendar asked head teacher of Chiswick School Laura Ellener what was planned. She said she had been told nothing about it.

On the same day, he announced that secondary schools would be made responsible for regular mass testing of secondary school pupils. We asked LB Hounslow’s Cabinet member for Education, Cllr Tom Bruce how it would work. He had no idea about that either, having had no time to plan or discuss it with the Department for Education, council officers or teaching staff.

“The Executive Director of Education in Hounslow had a meeting with officials from the Department for Education on Wednesday afternoon” he told us “and nothing was said”.

Now that the schools are all on holiday there is no time to organise something which is a major responsibility, of which the schools have no experience, before term starts again on 4 January, when they will be focused on mock exams. He is angry that this has been sprung on schools a day before the end of term. 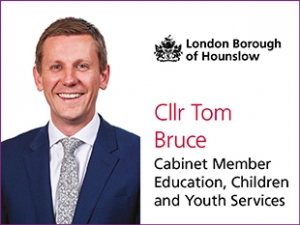 ‘The Prime Minister, and particularly the Education Secretary, Gavin Williamson must take full responsibility for the debacle of introducing mass testing for schools in January 2021, the day before the end of term. Another example that the Minister has no clue of how schools work.

‘As a teacher, and cabinet member for education in the London Borough of Hounslow, I know first-hand how hard schools have been working in ensuring our young people are safe and are continuing to receive the high-quality education they deserve. I am so very proud of the Headteachers, teachers, staff, parents, unions, governors and not least pupils who have shown determination and adaptability in the face of such extreme challenges.

‘I take no pleasure in highlighting that this Government at every turn have failed to provide adequate support to our schools. This comment certainly does not come with the luxury of hindsight but clearly can be seen with the piecemeal, last minute and delayed communication from Williamson and the DfE.

‘Many of the Government’s decisions and changes have had support from school leaders, staff and local politicians from across the political spectrum. But the manner of this government’s interaction, and at times inaction with our schools, shows a complete disregard for schools, parents, and more importantly pupils.

‘Their ineptitude includes the A Level and GCSE fiasco in the summer, daily changes to guidance, free school meals, laptops for disadvantaged children to name but a few, and then the late announcements regarding early closures of schools before Christmas and then when schools should return in the new year. We do expect this to change further due to Hounslow and London being in Tier 4.

‘My new year’s wish would be for the Government and the DfE to have a completely new approach on how they work with schools for the benefit of pupils and their education.

‘I would like to take this opportunity to thank the Heads, all school staff, pupils, parents and Governors for their hard work and commitment during the most difficult of circumstances and want to wish them a Merry Christmas and happy New Year.

Macken’s stuck with a freezer full of large turkeys