The Court of Appeal will hear all four legal challenges to the expansion of  Heathrow airport on Thursday 17 October.

Friends of the Earth, which is bringing one of the challenges said:

“We are pleased the Court of Appeal has agreed to hear our grounds for appeal against the damaging decision to increase the UK’s single biggest source of climate pollution at Heathrow.”

“This case is about saving the planet from catastrophic climate change. We need to leave the world in a better state for our children and their children, not a worse one.

This means ditching the expansion of high carbon infrastructure projects like the third runway at Heathrow. Expanding Heathrow will only benefit a minority of people, while leaving us all to suffer the awful impact on the environment.

Members of the campaign group Chiswick Against a Third Runway (CHATR) will be meeting at Turnham Green tube station at 07.45 on the morning of 17 October to go to the court.

‘We need a large turnout of locals to join other groups from all over London and the South East, and show strong opposition to having an extra 700 planes in the air over London every day’ said a spokesperson. 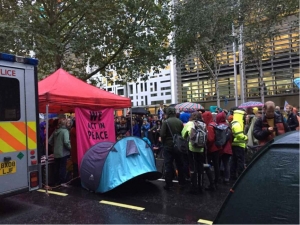 The court case falls in the period when Extinction Rebellion are planning to shut down central London.

It has said its members are planning to blockade “every single road” into central London for two weeks.

Those who were settling in for the night last night seemed determined to keep up the protests, with hundreds of people blocking streets and junctions.