By Matt Smith and Bridget Osborne

London’s police force has used the period of the lockdown to declare war on drug traffickers.

That represents a huge crackdown by the Metropolitan Police. While most of us obeyed the instruction to ‘Stay at home’, the Met took the opportunity to declare open season on drug dealers.

Commissioner Cressida Dick said:“We have made significant progress in our fight against violent drug dealers. The close partnerships formed with colleagues nationally have been crucial to this success, and I am grateful to them all for the part they have played – even throughout the last 10 challenging weeks”.

Police forces and a range of organisations which deal with young people have been raising the alarm over the past year on the growing influence of ‘County Lines’ organised crime gangs and their exploitation of young and vulnerable people.

The operations, which involve the movement of illegal drugs from one area to another, often cross police and local authority boundaries, the ‘County Line’ being the mobile phone used to take drug orders.

Areas where these gangs are active, can often see spikes in levels of violent, weapons-related crimes. 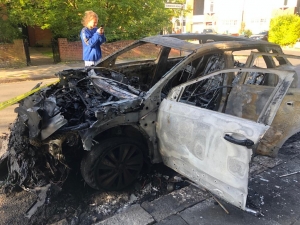 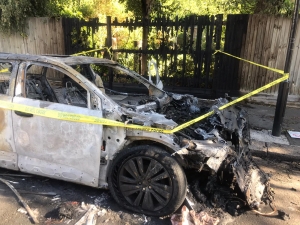 Images above: Burnt out car in Elmwood Rd, 17 May 2020, thought to be related to gang crime.

Over the past year the Met has developed a much deeper understanding of the drivers of County Lines and how the drug distribution network operates. Police operations across London have become increasingly successful and officers have disrupted ‘some of the most systemic drug supply lines across the UK’.

At the end of 2019 the Met received funding from the Home Office to tackle County Lines. A dedicated operation named Orochi was launched. As a result officers have closed 87 County Lines and achieved 183 charges for drug trafficking. Of the 18 cases which have gone to court so far, all defendants have pleaded guilty and received a total of more than 50 years imprisonment.

A multi-agency coordination centre has been established, bringing together officers from the National Crime Agency, police and regional organised crime units, this collaboration helps to develop the national intelligence picture and prioritise action against the most serious offenders.

In the past the Metropolitan police have arrested mainly those running the drugs, who are often young people being manipulated by gang members. Now they are able to target the line holders and dismantle County Lines operations systematically.

Gangs use vulnerable young teenagers and adults with mental health issues to deliver their drugs, sending them into areas far away from home to get new customers in a different territory. They groom children in a similar way to sexual predators, with gifts of £100 trainers and the opportunity to earn money and they pick on kids who are vulnerable – those who won’t be missed if they go missing for a few hours or even days.

A teenager might be given a train ticket and sent from London to York to stay with drug users in a squat, staying below the radar while they deliver drugs for their handlers. This exploitative process, known as ‘cuckooing’, often goes hand in hand with physical, mental and sexual abuse.

The gangs use teenagers because they’re not as noticeable and if caught they won’t be imprisoned as a seasoned drug dealer might. They are in effect hiding in plain sight. British Transport Police are now on the look out for teenagers travelling alone as the police have realized the extent of the exploitation of young and vulnerable people.

Teenagers more at risk while schools are closed

Schools and youth centres play a critical role in the fight against the gangs which prey on children, but Covid-19 has led to thousands of children falling off the radar. The fear now, is that teenagers are at a heightened risk of being coerced into criminal activity.

We spoke to a professional in the field, who told The Chiswick Calendar that while schools remain closed, teenagers are at greater risk from drug gangs.

“Since this lockdown, and with schools not operating, vulnerable children have become even more vulnerable” he told us.

“Based on the fact that school is used as leveller, even if a parent wanted to hide where their child has been, the school would automatically say ‘Where is your child? Your child hasn’t attended school. So there would be some kind of consequence” he said.

How do you know if a ‘County Lines’ gang is grooming children?

The police are asking the public to look out for signs of children being sucked into drug running by noticing a number of telltale signs. The National Crime Agency has published this checklist for spotting signs of a person’s involvement in a ‘county lines’ gang:

The expert we spoke to, who prefers not to be named, to maintain the confidence of the young people he deals with, told us vulnerable teenagers can be kept out of the clutches of dealers:

“People have to give young people hope, because it’s hope that they’re lacking”.

See also: More than 200 arrests made in violent crime operation

Black lives matter in Chiswick too