Image above: Paula Rego in her studio. Photograph by Nick Willing.

Hogarth’s House, which is managed by the London Borough of Hounslow, is hosting a special exhibition by artist Dame Paula Rego DBE RA, described in The Times this year as “Britain’s Greatest Female Artist”.

The free entry exhibition, of some 38 works, will run until November 26th, 2021, at Hogarth’s House in Chiswick. Opening times 12.00 – 5.00 pm, free entry, no need to book. The House is open Tuesday to Sunday and Bank Holiday Mondays

Paula Rego is particularly known for her paintings and prints based on storybooks. The works on show include original printing plates made by the artist and The Wine Series – six never-before-exhibited prints which have been given to Hogarth’s House.

“This is an honour for the Council and Hogarth’s House. We are so proud to be able to host the work of such an important artist at one of our most important cultural sites. This exhibition will draw visitors from around the world and present local people with the chance to see this fascinating work in their own borough for free. It’s very exciting for Hounslow to have this hand-selected show of the artist’s work at the same time as there is a major Rego retrospective at the Tate Britain.”

The exhibition includes a range of works from throughout Rego’s career and explores her admiration for Hogarth’s work and its influence on her own. Hogarth has always been one of Dame Paula’s favourite artists and he has been big influence on her own work.

“Hogarth is a very English painter of what goes on. He paints it all. He tells it in the form of a narrative so there are usually four or five pictures, like a comic, depicting various stages of people’s relationships and how things were. Hogarth shows everything. He’s a wonderful painter of chaos and cruelty. He creates extraordinary images. In spite of the cruelty, there’s also a great deal of tenderness for the people in Hogarth’s pictures. He’s a curious mixture, which I find very startling, and that’s what I like.’

A range of work from throughout Paula Rego’s career

The pieces in this exhibition have been generously loaned by The Cristea Roberts Gallery. This is the first special exhibition on display at the House after the completion of the Mulberry Garden project which has seen the garden redesigned and a new learning space, the Weston Studio, added to the site.

Dame Paula Rego was born in Portugal in 1935 and now lives in London. She is recognised as one of the most significant artists of her time, whose extraordinary imaginative power has played a key role in redefining the possibilities of figurative art. She has turned to folk tales and nursery rhymes for her subjects, as well as to stories from her native Portugal and the injustices of sexual politics. Honoured by the Queen with a Damehood in 2010, she is the subject of a major retrospective this year at Tate Britain.

The earliest prints in the exhibition are etchings, taken from the artist’s Nursery Rhymes series of 1989. The three etchings entitled After Hogarth relate to the end of the story of the disastrous marriage told in Rego’s large-scale triptych. There are also five plates from Pendle Witches made in 1996, inspired by the trials and executions of a group of women from the Lancashire village of Pendle who, in 1612, were accused of witchcraft.

The Crow series of 1994 consists of four prints, all of which are shown here and there are also three prints from her painfully direct Untitled series of 1999-2000. These are shown together with a selection from a set of lithographs that she made in 2001-02, to illustrate Charlotte Bronte’s Jane Eyre of 1847. 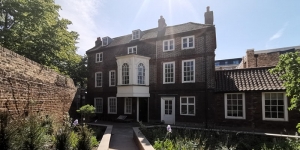 To mark this exhibition, Dame Paula has given Hogarth’s House a series of six works, The Wine Series. This series was originally commissioned by a wine company to be reproduced on wine labels. However, when they saw the finished works, all made with a true Hogarthian spirit, the company had second thoughts and they were never produced.

The works are on public display here for the first time. Four are in the exhibition itself and two are hung in the permanent galleries in the House next to Hogarth’s Beer Street and Gin Lane.

Hogarth’s House is the former home of painter, engraver and satirist William Hogarth who owned the House from 1749 until his death in 1764. It remained in his family’s hands for the rest of the eighteenth century.

Hogarth is known as the Father of English Painting and his influence has been felt by everyone from JWM Turner to Igor Stravinski, Peter Blake and Grayson Perry. Hogarth’s House has been open to the public since 1904 and displays a comprehensive collection of his works as well as information on his life both in the House and within his social circles.

See also: July 2021 Gallery of pictures from the Flower Market