An ice cream salesman has won approval from the local council to trade outside a Chiswick school, despite objections from two head teachers.

Marcele Detomaso, who sells gelato from a tricycle, applied to park his stand outside Strand-on-the-Green Infant and Junior Schools. Headteachers of both schools objected to the application, citing ‘consistent community resistance’ to the sale of ice cream outside school gates, as well as childhood obesity fears.

Despite the objections, Hounslow’s licensing panel gave the green light on Tuesday 6 July.

Neither head teacher appeared at the panel to argue their case further. The panel granted Mr Detomaso’s six-month temporary licence to station the gelato bike more than 30 metres away from the gates on Brooks Lane.

Marcele, a Strand on the Green resident whose three children were educated at the schools, told the panel he was applying for the licence as “peacekeeping” with the school, who had started a petition to “ban” him from waiting near their gates. 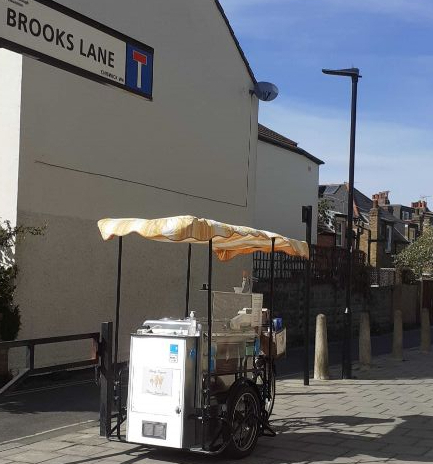 ‘Every year we get negative feedback from parents about the stall, who feel that this is not an appropriate place for an ice cream van. Every day at pick up they have no choice but to walk out past this street trader and they feel pressured to buy. When they do not buy, it causes unnecessary and potentially avoidable confrontation with their children, interrupting a ‘happy pick up’.’

‘Like our Infant colleagues we are a ‘healthy school’ and have a range of initiatives to support healthy lives. An ice cream stall, selling an intrinsically unhealthy snack, so near to the school is in direct conflict with this message and does not support the schools, and indeed the local authority’s commitment to reducing childhood obesity and promoting healthy eating.’

Mr Detomaso disagreed that his gelato is unhealthy, saying:

“The gelato is organic that I serve, no preservatives, no colourants, no animal gelatine, it’s authentic artisanal gelato.”

Children stop in “joy” when they see his tricycle, he added. The gelato trader added that the schools were “great” and claimed he knew the head teachers personally.