If the importance of an arts venue can be measured by the number of celebrities who gallop to the rescue at a time of crisis, Riverside Studios is a true cultural icon.

TV personalities Stephen Fry, Jo Brand and Eddie Izzard are just some of the famous names who came to its aid when the venue was closed by COVID-19. Since the end of April they’ve been presenting online quizzes to raise cash for the embattled institution.

Because, while all theatres are currently struggling, March’s lockdown came at a particularly calamitous time for Riverside. The brand new complex, including studios for TV and theatre, cinemas and a top-notch restaurant, had only recently reopened after a five year closure for rebuilding work. Worse still, the project had left the Studios with a debt of more than £20 million. 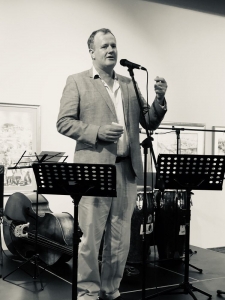 The centre’s Interim Executive Director, Tony Lankester, says “We’re not paying the presenters, we haven’t paid John. Everyone’s done it just out of generosity, which has been fantastic.” So far more than 1,000 people have attended the events. And, in keeping with Riverside’s dual commercial and charitable functions,ten percent of the proceeds are going to help five local NHS hospitals.

Presenting his quiz in May, Fry told the audience the celebrities were all keen to help.

That’s because Riverside is part of Britain’s cultural DNA. Many of the quiz presenters have appeared at the Studios. And even if you haven’t physically attended a Riverside show yourself, you’re likely to have seen something that’s made there.

From the 1930s, it was a film studio, producing classic British films. Then the BBC took it over, using it to record iconic programmes like Hancock’s Half Hour and the early Dr Who series. Later still came Top of the Pops, Chris Evans’ TFI Friday and Never Mind the Buzzcocks. Writers like Samuel Beckett, Allen Ginsberg and Margaret Atwood have worked there, as have stars like Helen Mirren, David Bowie and Amy Winehouse. 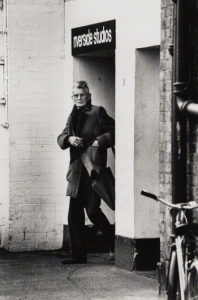 So when Tony Lankester left his home in South Africa last September to join Riverside, he knew expectations were high. Less than a year later, he’s facing the Herculean task of getting the massive arts centre up and running again in an era of social distancing, while chipping away at that £20 million debt.

Asked about the debt, Lankester admits “It is a big number. It’s a scary number”. But he’s quietly confident. He says Riverside has taken up assistance offered by the Government, including furloughs for some of their staff. And, he adds they’ve been lucky to have an understanding Dutch bank, Triodos.

He’s constantly in touch with the bank, keeping it up to date on new plans. “So they can see we’re not just sitting around and being all gloom and doom, we’re being proactive about it, we’re doing things. We’ve mapped out the next couple of months and we know that we’re going to see it through, bar any sort of curve balls that might come our way”.

And Lankester is certainly doing a lot. The quizzes have helped to raise cash, as has reopening the bakery and coffee shop for takeaways. When the Government gives the go-ahead, the restaurant will reopen. And Tony hopes to be able to reopen the cinemas by the end of July, to coincide with the release of the much-anticipated Christopher Nolan film, ‘Tenet’.

“Our fortunes are tied to the release of that film at the moment”, he says. “That’s going to be the one big film that gets people back into the cinemas worldwide, I think, not just in west London… people have been waiting for the film, there’s a lot of buzz around it, it’s going to create a lot of noise.”

The biggest question mark of all hangs over relaunching live theatre at Riverside. Even when the Government gives the go-ahead, Lankester says, it’s a question of weighing up public appetite and financial viability, given the challenges of social distancing.

“Because it’s all very well putting a film on a pressing ‘play’. You‘re not incurring huge expenses to do that. But as soon as you put a live production on stage, then immediately you’ve got actors to pay, you’ve got the director to pay, you’ve got lighting designers and so on. So there’s a whole ecosystem that needs supporting. And if your capacities are only 15 – 20 – 30 people in the theatre, obviously it’s difficult to cover those costs.”

“So it’s a juggling act. We’ll open the theatre as soon as it’s financially viable and practically viable. I would like to think that it will still happen this year. But we just have to keep an eye on it.”

Meanwhile, Riverside continues to earn cash by renting out its studio space to TV companies. One studio is being used to film BBC One’s Peter Crouch: Save our Summer which goes out on Saturday evenings. A different production company has just signed up to use another studio until October.

Riverside’s TV facilities, Lankester says, means  “we have an advantage that not a lot of other theatres have. A lot of them are really in distress and they’re staring at the bottom of the barrel.”

In the interim, Riverside is continuing with its online community engagement programme, Digital Dive In, offering everything from yoga to film and book clubs, storytelling and dance classes for children.

And, of course, those online celebrity quizzes, which have attracted publicity and quiz fans from all over the world. But Tony says they won’t continue beyond the current run of six, which ends on July 8th.

“We’ll draw it to a close. We’re not going to go beyond that. Because by mid-July, I think, Zoom-fatigue will have set in. I think, frankly, far better to say we’ve done six, they were great, let’s draw the curtain. And from the middle of July, I think we need to turn our attention back to opening up in the real world. We just don’t want to overstay our welcome.”

Pam O’Toole is a journalist who worked for BBC World Service Radio. She has lived in Chiswick for many years

Councillors admit there will be traffic chaos at first