It’s always rather demoralising after the Boat Race to see the river banks and the River Thames itself littered with plastic cups and the remains of people’s picnics.

This year the environmental damage wasn’t quite so bad, thanks to the campaign In the Drink. The initiative by Paul Hyman, who runs the paddleboarding outfit at Kew Bridge, and a group of environmental activists, was launched last week.

The campaign aims to rid the Thames of plastic waste by persuading pubs and anyone  near the river not to use single use plastic straws and cups. The problem is that even if people have thrown them away in the bins provided, these are often overflowing and the plastic finds it way into the water.

Paddleboarders started the campaign by organising regular clear-ups of the river themselves, fishing out anything from water bottles to traffic cones.

Their efforts were rewarded last weekend by Positively Putney investing in 14,000 reusable plastic cups to be shared among eight pubs at this year’s annual Boat Race Day.

Paul Hyman told me it was a “great start” but hadn’t achieved all that it might, as users weren’t asked to pay a deposit which they got back on return of their cup, so many ended up in the bins and some in the river.

He also noted that Hammersmith & Fulham had made great efforts to collect waste this year, tying waste sacks to the railings of Bishop’s Park to supplement the permanent waste bins. 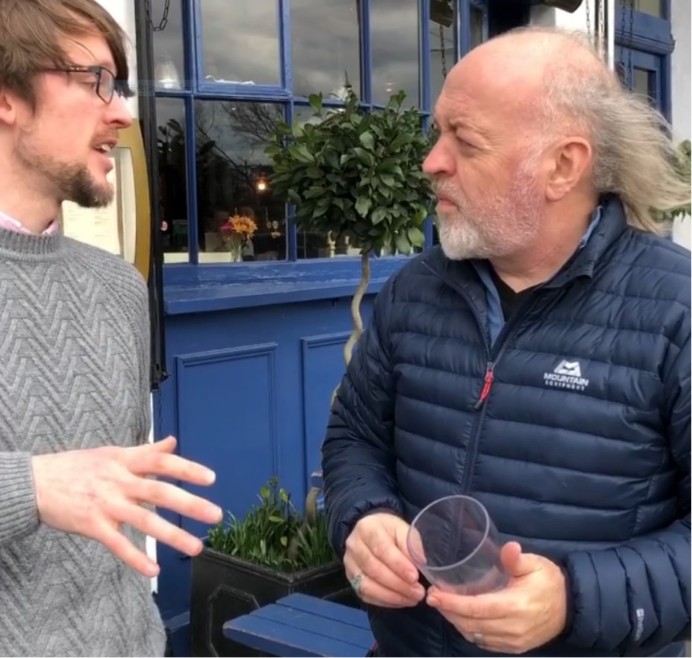 Comedian Bill Bailey with In the Drink campaigner

Less pleasing were the free bottles of water handed out by sponsors Smartwater, owned by Coca-Cola, many of which were left lying about at the end of the race.

In the Drink has had a £10,000 grant to research the extent of the problem and practical alternatives, the reusable cups demonstrated at the launch by supporter and keen paddleboarder, comedian Bill Bailey.

“We want to work with riverside bars, events and venues to establish mutually beneficial systems to phase in sustainable alternatives,” said Alison Baker, co-founder of In The Drink. “We’re hoping London pubs will help us and work together to look after the river we all love.”

Now all they need is a sponsor to give them the funds to take the work forward.