In the midst of what he called “huge financial challenges”, London Mayor Sadiq Khan has announced a further £30million investment in policing to ensure that more than 1,000 Metropolitan Police officers will continue to patrol the streets of the capital for the next four years.

The Metropolitan Police has recruited an additional 1,300 police officers over the past three years.

The announcement ring-fences funding from City Hall for the next four years for those additional officers, whose posts might have been at risk because of the impact of Covid-19 on business rates income.

On top of this, the Mayor has proposed a further £8million of new Council Tax funding on additional violence prevention programmes.

The new investment will fund a range of projects to reduce violence, such as expanding GPS tagging of violent offenders after prison release and extending the funding for youth work services for young victims of violence seen in London’s trauma centres and A&Es.

City Hall says that violent crime had started to fall before the pandemic, and has continued to do so since the first coronavirus lockdown in March last year. Since 2016, it says, Mayor Khan has diverted more than £1billion of Council Tax and business rates receipts to policing.

Policing in the capital – which includes a range of additional duties, such as state visits, anti-terrorism units and diplomatic protection that tend not to be required elsewhere in the country – ‘remains underfunded by government by more than £160million per year’. 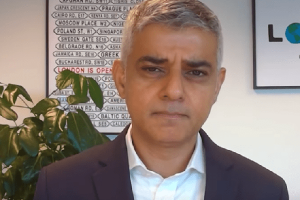 ‘The government continues to refuse to fully refund the Met for the costs incurred in supporting the capital during the covid-19 pandemic’, the City Hall statement said, claiming that £21million of covid costs remain unfunded this financial year.

In his speech, Sadiq Khan said:

“Violent crime had been increasing across the country and in London since 2014, while serious youth violence had been going up since 2013. We’ve worked hard to tackle violence in our city, and it started to fall well before the pandemic hit and has continued to do so. But I am not content or complacent, we still have a long way to go.

“If we are to see the long-term reductions in violence that we all want to see in our city, we must continue to tackle the underlying causes of crime, such as poverty, deprivation and lack of opportunities for young Londoners.

“I’m doing everything I can from City Hall to reduce violence, but it’s clear we still have huge financial challenges ahead because the government has implemented a new era of austerity on public services in London.

“Ministers must now match my commitment to tackling this issue and fully refund City Hall and the Met for all the lost income and money spent tackling the pandemic.”

Preparations made to clear the way for building new footbridge