“We are delighted to announce that two great 20th Century poets, Dylan Thomas (Under Milk Wood) and James Berry (Windrush Songs), have been added to Chiswick’s Writers Trail, which features acclaimed novelists, poets and playwrights who lived in Chiswick or had connections with the area.

A further 400 writers are listed on the ‘Chiswick Timeline of Writers & Books’, leading The Observer to write that ‘Chiswick may be Britain’s most literary location’.

Further proof of our literary pretensions, if proof were needed, was provided by local historian Val Bott, who confirmed that Dylan Thomas lived in the Vicarage of St Paul’s Grove Park during World War II, when she unearthed a letter written by him from the Vicarage. He also stayed at Shop Cottage at Strand on the Green and at 13 Hammersmith Terrace.

Images above: Dylan Thomas; letter he wrote to the poet and literary editor John Bayliss when he was living at the Vicarage at Grove Park

St Paul’s Grove Park is currently celebrating its 150th anniversary. Sunday 15 May will see the production of Hear The People Sing, a celebration of 150 years of music in Chiswick.

This very special concert, to mark 150 years since the founding of St. Paul’s Church in Grove Park and the residential area of Grove Park itself, will include musical styles from the Chiswick Music Hall to the Beatles, Zadok the Priest to the Artful Dodger.

It will be followed by other concerts, services, a poetry evening, a history talk, a flower festival and a comedy night. A new exhibition reveals more about the church and its place in Grove Park’s history. Ticket information and other details are on the St Paul’s website stpaulsgrovepark.com.

Image above James Berry; from the Black History Month website

James Berry a resident of Chiswick

The Windrush poet James Berry, who died in 2017, spent weekends in Bedford Park for 20 years before moving into a flat in Homecross House in Fishers Lane.

He was filmed there giving a reading – Windrush Songs – and lived there till 2011, when Alzheimer’s Disease led him to go into a nursing home. His works continue to sell well and in August 2022 one of his award-winning poetry books for children, Only One of Me, is being reissued. His literary archive has been acquired by the British Library.

James Berry, OBE (born 1924), emigrated from Jamaica and settled in England in 1948. His reflects the oral traditions of the Caribbean, using both standard English and Jamaican Patois.

Berry’s writing often “explores the relationship between black and white communities and in particular, the excitement and tensions in the evolving relationship of the Caribbean immigrants with Britain and British society from the 1940s onwards” – Black History Month 2022 website.

As the editor of two seminal anthologies, Bluefoot Traveller (1976) and News for Babylon (1984), he was at the forefront of championing West Indian/British writing.

Read more about him on the Black History Month 2022 website. 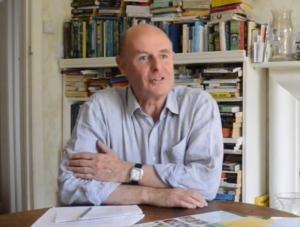 “When we created the Chiswick Writers Trail in 2018, I was delighted to have found 21 acclaimed poets, playwrights and novelists who had lived here.

“Since then, residents have suggested many more and, after checks by local historians and others, we have chosen a dozen to join the list. We’ll announce more names in the next few weeks on social media, leading up to WB Yeats’s birthday on Monday 13 June, which will be celebrated at the annual Poetry Evening in the Bedford Park Festival.”

Read more about James Berry in Chiswick on the Chiswick Book Festival website.

Read more about Dylan Thomas in Chiswick on the Chiswick Book Festival website.

See also: Chiswick puts its stamp on the Jubilee

Chiswick puts its stamp on the Jubilee