The announcement by Boris Johnson that London would be going into Tier 4 and non-essential shops must close, left retailers and customers scrambling to work out what they could still salvage from the Christmas chaos. 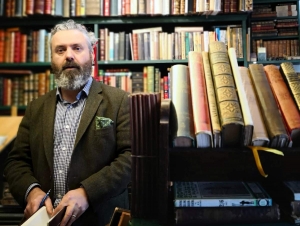 “Kick in the teeth”

Stephen Foster, owner of Foster Books described Saturday’s announcement as “a kick in the teeth”. What makes him so angry is the timing of it.

“The British Medical Association has been telling the Government it’s a bad idea for everything to be open at Christmas, yet they persisted with this idea of the five day Christmas and now they’ve left it to the last moment to cancel it. I’m furious because this week has probably three of the busiest days of the year.

Yesterday I had someone who was just passing, saw we were open and came in for a browse. He spent £400 because he just happened to see something and thought he would treat himself. We lose all that kind of custom. Today (Sunday 20 December) the phone has rung twice”.

Stephen stayed open late on Saturday, to make the most of the hours they were allowed to remain open, and like many retailers considered ‘non-essential’ they are now offering a click & collect services for anyone who orders books and cards from their website: fosterbooks.com

Images above: Alice’s Advertures in Wonderland and Through the Looking Glass, Hans Anderson’s Fairy Tales, Collected poems of Rupert Brooke, from the Christmas present selection at Foster Books

The Christmas sales boost is generally what sees retailers through the rest of the year. The ‘golden’ quarter, the three month run up to Christmas usually accounts for a large part of a retailer’s annual sales and profits.

It came as a severe blow that non-essential shops had to close in November. There was confusion when London went into Tier 3, with many consumers assuming the shops would be closed when they weren’t. Now they’ve had only a couple of hours’ notice that they must close for what is usually the busiest shopping week of the year.

“Who knew Boris would pull this one?”

Retailers are now very practiced at adapting at a moment’s notice, but they still need to know what to be able to tell their customers. John Fitzgerald, who runs Snappy Snaps, Chiswick, told The Chiswick Calendar Saturday’s announcement created total confusion:

“Its very disappointing to be given such short notice, I fully understand the need to react a rising Covid infection rate but It does make it very difficult when the guidance was released three hours after the announcement. On Saturday we were inundated with calls from customer concerned if we would be open tomorrow and we did not know.

“It was very distressing for our customers who were unsure if they could even collect their work before Christmas. Fortunately we can remain open as a click and collect site but it was after 7.00pm before that was confirmed”.

Image above: Christmas decorations at Greige

“Devastating news for us and and all fellow small independents”

John Farrant, who owns the homeware shop Greige on Bedford Corner with his wife Pauline, described being forced to close as “a blow … another one, but we will pick ourselves up, brush ourselves off and start again!

“Sadly, for the third time, we are forced to shut the door to our shop for the foreseeable future, something we really didn’t expect (this side of Christmas at least). Devastating news for us and all fellow small independents trying to make it through these uncertain times”.

They too are open online. For local customers they are offering a click & collect service from their Chiswick warehouse, with free local delivery within W4.

Image above: Windfall in Turnham Green Terrace is considered ‘essential’ as a health store, and remains open to walk in customers

What is considered an ‘essential’ shop and what is not?

Which shops are considered ‘essential’ and which are not?
Scroll to top