‘Freddie’, the seal that was attacked by a dog near Hammersmith Bridge on Sunday (21 March) was put down on Monday (22 March).

After the dramatic rescue by passers-by, who got the dog off him, pinned him down and stopped him returning to the river, badly wounded, he was taken to the South Essex Wildlife Hospital, where he was assessed on Monday. His wounded flipper was both dislocated and fractured in the attack.

After treating his wounds, giving him pain relief and antibiotics and an Xray of its wounded flipper, staff at the animal hospital put out this statement:

‘The flipper is very swollen and despite antibiotics and pain relief the seal is clearly very uncomfortable and reluctant to eat. We suspect the infection is spreading and with the other bite wounds to his body he is very miserable. At this stage we believe the only ethical and fair option we have is to end his suffering’.

Freddie waiting to be taken to the wildlife hospital

A short but adventurous life

It appears Freddie was only a young seal, but had managed to have quite an adventurous life. The British Divers Marine Life Rescue volunteers who helped get the seal from Hammersmith to the animal hospital, knew his life history because he’d been tagged.

“He has a plastic tag on his flipper. He was rescued as a very young pup, like a week old or something, and was taken to a seal rescue centre in the Netherlands. They had him in for a couple of months, got him fit for release then they let him go around October last year I think.”

The Netherlands is also where he was given his name, after Freddie Mercury, when he was admitted to a rescue centre Pieterburen in August 2020.

Freddie has also been to France, where he was rescued again on 9 January 2021. Here he was admitted to a rescue centre with a suspected case of lung worm where he took a couple of weeks to recover. Freddie was then released from Calais and eventually he made his way into the River Thames.

Freddie in trouble earlier in the year

“This particular seal we rescued a month ago” Julie told us, “because he ended up in Teddington Lock with a fishing lure caught in his mouth, which is one of the main hazards of seals in rivers. They will get entangled, and they’ve got boat traffic and river traffic to navigate around.”

Freddie was released in the Swale Estuary near the isle of Sheppey. There are plenty of seals living there, and they thought he would “just go off to live with them”. Instead, he came back into the Thames.

“We don’t get many rescues in the Thames because generally it’s a really nice place for them to be. The riverbanks are fairly small, it’s not like being on a large expanse or anything. They’re quite close to the water, so if they’re not happy when people come up to them out of the water they can go back in the water.”

Freddie had become a popular sight in recent weeks, basking on a slipway near Hammersmith Bridge. He had even featured on national television, since Good Morning Britain presenter Holly Willoughby lives nearby.

When Freddie was attacked on Sunday, passers-by jumped in to try and help the owner pull the dog off him, and eventually they managed to get the dog away, but not before the seal had been badly injured.

Runa Bousquet saw the whole thing and stayed for more than an hour and a half with a vet, a photographer and a cyclist who sat on the seal and held it down to stop Freddie escaping in to the river while they waited for help. 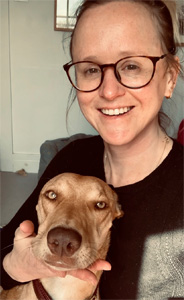 Rachel Kirkby was the vet, who turned up seconds after Runa. She left her own dog Orla with Runa’s teenage daughter while she set about trying to calm the seal. She told The Chiswick Calendar that despite the blood everywhere, she was more concerned with the potential damage from crush injuries from the dog’s jaws. As a vet with 15 years’ experience she has seen the results of many dog attacks, but not usually on seals.

“I’m pretty devastated to be honest, the injuries must have been far worse than they appeared – I’d been confident he would recover and the news made me quite teary. He went through such an ordeal, and everyone involved had hoped for a better outcome. At least when he passed he would have been in caring hands and without fear. RIP Freddie Mercury”.

She worked hard to keep him alive. She knew the seal would not stand a chance if it returned to the river, so the unnamed cyclist sat on the seal’s body with his full weight while she held its head and photographer Lloyd Arnold provided a prop to stop the seal wriggling down the slipway. They swapped positions when one of them got cramp.

Freddie weighed about 70 kilos and was strong, so it was tiring work. She and Lloyd were treated at A&E after – Rachel for a bite on her thigh and Lloyd for a split lip when Freddie headbutted him.

The difficulty of operating on seals

In their public statement the South Essex Wildlife Hospital said:

‘Seals do not take anaesthetic well as they have a dive reflex and don’t breath. Although an attempt could be made to pin the fracture, it would be impossible to immobilise the limb to give it time to heal. More challenging is the dislocation which is not repairable.

‘We know this is a well loved seal from the amazing response we have had to his story but he is not the only seal we have had to care for that this has happened to. Please folks do not go near seals and always, always, keep dogs on leads and under control’.

See also: A year of pandemic – how has Chiswick fared?

‘Freddie’ the seal attacked by dog near Hammersmith Bridge