Transport for London is seeking to bolster its enforcement efforts on tubes and buses due to declining rates of mask-wearing, with Mayor of London Sadiq Khan warning passengers face a “lottery” of catching Covid on London’s transport network.

Anyone who’d used the Underground in recent weeks will know that it’s quite common for at least half the people in a carriage not to be wearing masks. Those that do often wear them helf-heartedly, with their mouth covered but not their nose.

The Mayor said the Government’s decision to axe the legal requirement to wear a face covering on public transport increased the risk to commuters. Though wearing a mask was made a condition of carriage for passengers using public transport in London, many don’t stick to the rules.

Siwan Hayward, TfL’s director of compliance, police operations and security, said the removal of legal repercussions is the reason compliance has fallen off:

“Since the Government removed the legal requirement to wear a face covering, compliance is beginning to fall. When it was a legal requirement, it’s clear that the risk of being fined or being prosecuted did drive-up the level of compliance.”

Image above: a woman wears a face-covering on the Tube

Transport Support Enforcement officers were out in force at Liverpool Street station during rush hour on Wednesday 23 September, when the Mayor made his statement, in a bid to remind commuters that masks must still be worn on TfL services, but with it no longer being a legal requirement, police cannot enforce mask-wearing and those who refuse cannot be fined or prosecuted.

On Wednesday the police presence at Liverpool Street was enough to persuade the majority of passengers to wear a face covering before entering the tube. Officers handed out masks to passengers who didn’t have one and said that refusing entry was a last resort. These compliance officers generally strive to educate passengers on why they should wear a face covering.

Customer research carried out by TfL between 25 July and 21 August found that 82% of passengers said they were continuing to wear a mask, though TfL staff and stakeholders say they have noticed compliance falling below this level.

Mayor lobbying for introduction of a by-law 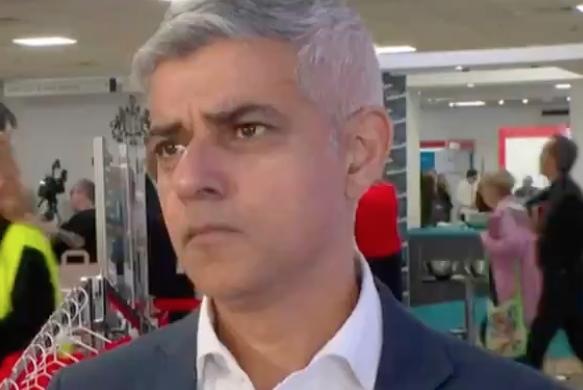 Sadiq Khan has been lobbying the Government to introduce a by-law that would once again make face coverings a legal requirement in London, though he has so far been unsuccessful.

If the by-law were introduced, it would mean that British Transport Police would once again be able to fine passengers who refuse to comply and prosecute those who do not pay the fine.

“I continue to lobby the Government to either make it a national requirement, so we can use the police to enforce this and issue fines, or to give us the powers to issue a by-law.

“At the moment, we are not getting the help from the Government we need. As a consequence, people who can’t keep their social distance and have to use public transport are taking a lottery with the chances of potentially catching it.”

TfL prosecuted around 2,000 people for refusing to wear a face covering while it was a legal requirement.

See also: Man confesses to Chiswick Police an unsolved murder from 37 years ago

An introduction to creative writing autumn 2021