You are here: Home1 / The Chiswick Calendar Party – January 2020 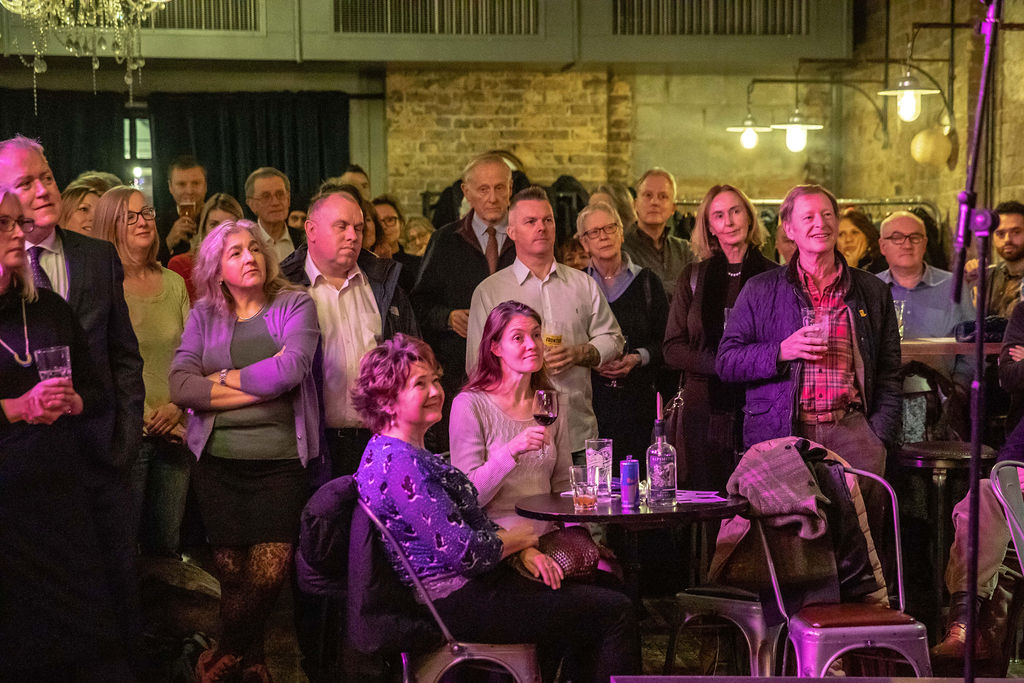 Photograph above: Some of the guests at the 2019 party. Photograph by Anna Kunst

The Chiswick Calendar has a party every January to which all our subscribers, friends and associates are invited. We talk to a lot of people throughout the year, promoting your events and your businesses and finding out who’s planning what for Chiswick. This is a way of getting everyone together to thank our partners and update you with what we’re planning next. It’s also a good opportunity for people who organise events in Chiswick to meet each other and mingle.

The party is held in the Boston Room of George IV and we make a small charge to cover the cost of the band. The Chiswick Calendar is a Community Interest Company, recognised by Companies House as a community resource. Any profit we make has to be ploughed back into the website for the good of the community.

Join us in 2020 for our fifth birthday bash. The most informal AGM you could possibly find! Music from the Greg Davis trio.

Five years of The Chiswick Calendar

Since we set up in November 2014 we have established the website, which now has some 8,000 users per month, and the weekly newsletter, which goes out to more than 4,500 people locally. We’ve set up the Club Card scheme as a way for local businesses to offer deals and discounts to our subscribers and persuade people to spend their money locally. Jazz at George IV is getting good audiences on the first Thursday of the month, thanks to Larry Pryce’s great contacts in the music business and our Media Club and political debates have been well attended and appreciated, thanks to journalists and broadcasters Julian Worricker, Jo Coburn, Jamie Coomarasamy, James Rodgers and Peter Oborne amongst others, for provoking lively debate.

We’ve also established a tradition of holding art and photography exhibitions at the Clayton Hotel Chiswick – photography in the spring: Chiswick Through the Camera Lens, and art in the autumn: Chiswick In Pictures. Thanks to all the fabulous artists who take part. In 2019 we gave out awards to some of the people who had done good things in Chiswick – from Torin Douglas, celebrating ten years of the Chiswick Book Festival, to Glen Monroe, senior helmsman with the RNLI, who has spent many years saving lives on the river.

We couldn’t have done any of this without the support of our sponsors John D Wood, who have been with us from the start, Fuller’s, now Asahi UK, the Hogarth Club, Arts Ed and the Clayton Hotel Chiswick.

Photographs below from the 2019 party by Anna Kunst:
Literary agent and book blogger for The Chiswick Calendar Anna Klerfalk; Anna with guest editor of our newsletter Lucinda MacPherson; The Chiswick Calendar’s editor Bridget Osborne; Lucinda with supporter Roberto Mircoli; chef and co-organiser of the Cookbook Festival Jo Pratt; Directors of Abundance London Sarah Cruz and Karen Liebreich; organiser of Better Mental Health Chiswick, Sally Malin and crowd scenes! You know who you are!