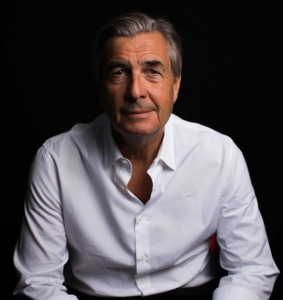 “It’s an amazing achievement for a U.K. show, especially in a 4th series, to win four Golden Globes.

“And it’s a great tribute to an outstanding British cast and to the 600 incredibly talented people who are involved in a series  of The Crown.

The award ceremony took place virtually, with the various technical glitches we’ve come to expect of virtual meetings, throughout the show. I asked Andy if he’d taken part, dressed up in his tuxedo, champagne in hand, from his house in Chiswick.

“In normal circumstances those lucky enough to be in LA like me would have been all dressed up in our finery enjoying the excess of LA’s Hollywood parties and the accompanying  glamour. Sadly Covid meant watching the ceremony on my lap top in my pyjamas in W4 with a cup of tea to stay awake!!

“That’s the reality of our business in these surreal and challenging times. But hey …. it is great that people all around the world love the show. That means a lot”.

Emma Corrin, who won the award for best actress in a drama TV series, thanked the late Princess Diana in her acceptance speech:

“You have taught me compassion and empathy beyond any measure” she said.

Emma came to the role fresh out of drama school and looked visibly shocked as her name was called. She was up against Olivia Coleman in the best actress category, who won the award for her rols as the Queen in The Crown in 2020. Olivia leapt out of her seat and did a little dance as Emma’s name was called, to celebrate her win.

Images above: Josh O’Connor as Prince Charles with Olivia Coleman as the Queen; Gillian Anderson as Margaret Thatcher in The Crown; photographs courtesy of Netflix

Gillian Anderson was also pitched against a fellow cast member in the best supporting actress category. Helena Bonham Carter had also been nominated for her portrayal of Princess Margaret. Gillian, who had margaret Thatcher’s voice off to a tee in the series, surprised the audience by accepting in her native Chicagoan accent. It’s hard not to think of her as English.

Josh O’Connor, who won best actor in a drama TV series, was up against Al Pacino amongst others. He used his moment in the spotlight for a message about mental health, urging that we:

“all collectively put mental health at the forefront of our minds”.

See also: The Crown’s Andy Harries talks to The Chiswick Calendar on the launch of series four

Man in the Middle Chapter 61 – Moonpig, Mother and me