Residents of Chiswick’s Glebe Estate have never been so thankful for their wide streets, front and back gardens, and the community spirit that has helped us all survive nearly a year of Covid lockdowns.

On Tuesday 12 January 2021, at the Chiswick Area Forum, LB Hounslow launches a consultation on awarding Conservation Area status to the Estate, not because it’s one of Chiswick’s prettiest and most popular places to live in, but due to its heritage value. For its streets and houses were built 150 years ago to provide healthy lives for working families formerly consigned to overcrowded and unhealthy dwellings. The urban historian and Glebe Estate resident Tracey Logan says this couldn’t have come at a better time.

The Joy of Glebe

Chiswick’s heritage accounts for much of its appeal. Chiswick House, whose sumptuous early-19th century garden parties once hosted princes and princesses (and giraffes), reminds us of our aristocratic past and the impact of early nineteenth century enclosures. There is Bedford Park, the Norman Shaw designed late-nineteenth century ‘garden suburb,’ which offered middle-class commuters ‘the healthiest place in the world’ to live in when they weren’t at work in the grimy City.

The significance of the Glebe Estate terraces, just south of Chiswick High Road on Devonshire, Duke, Reckitt and Quick Roads, Glebe, Dale and Fraser Streets, is due to its status as Chiswick’s first Victorian working class housing estate. Now Chiswick must decide whether its working class heritage is worth commemorating.

Many people assume the Glebe Estate is already a conservation area and, as estate agents agree, its cottages are among the most sought after in Chiswick. In her 2003 article for the Brentford and Chiswick Local History Journal the late Gillian Glegg, author of many local history books and a Glebe resident of 17 years, decried its lack of ‘listed’ status, hoping that now a campaign might start to make it a conservation area to protect it from ‘the modernisers’ worst flights of fancy.’

Glebe residents have benefitted greatly from modernisations since they first bought their cottages’ freeholds in the 1960s and installed indoor baths and loos. Since then the value of Glebe Estate homes has shot up. Clegg had bought her two-bedroom cottage in 1982 for £54,000 and by 1999 it was worth up to £450,000. Today a similar cottage might sell for £1.2 million. Though frequently contested by neighbours, development has adapted our dwellings to modern lifestyles, bringing more young families into the area as well as retiring downsizers.

The current conservation area proposals recognise the Glebe Estate’s place in the mid-Victorian movement to provide better homes for the poor. Early residents were bricklayers; carpenters; decorators; clerks, etc. These were the men who built modern Chiswick. Victorians called them ‘artizans,’ others the ‘deserving poor.’ In 1867 Benjamin Disraeli considered them worthy of the vote. In 1871 Gladstone gave them the right to join trade unions. Other Acts of Parliament designated slums, which so many urban poor were forced to live in, as ‘unfit for human habitation.’

Since the Great Exhibition of 1851 philanthropists had promoted model dwellings offering basic hygienic facilities to the poor, frequently with morality clauses such as the avoidance of alcohol and regular church attendance. The Peabody Estates showed how such dwellings could be built cheaply, but they were blocks of flats, and even poor people thought it would be nicer to have a house and garden with your own front gate.

Building the Glebe Estate was a purely commercial proposition for its four-man development consortium led by Alexander Fraser, best known locally for his 200ft water tower at Kew Bridge. Another well-known member was George Reckitt, of the Hull-based starch dynasty, who was in London in the 1860s as its first sales representative and, like the others, invested in property on the side. Their consortium, which also included the leading water engineer Joseph Quick, arose through shared investments in various Joint Stock companies but their Glebe speculation was riskier and undertaken after the 1866 stock market crash.

It was the plan to open a railway station on Turnham Green Terrace that led the Vicar of Chiswick to offer his Glebe Field for a housing development. It opened in 1869, a year after the Glebe Estate’s first lease was signed. The cash-strapped Reverend Lawford William Torriano Dale saw this would boost his income by swapping profits from market gardening produce on his Glebe field for ground rents. 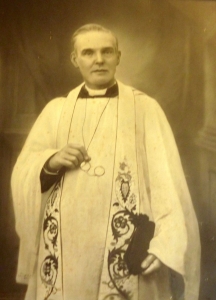 Revd Dale was a missionary priest with ritualist leanings who needed the money to help 1500 ‘very poor’ parishioners.

After an initial experiment with grander dwellings on Devonshire Road, the Estate became dominated by small-but-perfectly formed cottage terraces, whose large windows and fires in each room, with front and back gardens, ensured warmth and the healthy free circulation of air. The Estate’s gardens have been a godsend during the Covid19 lockdowns over the past year.

Among the great joys of studying Glebe Estate history is searching for clues about how and when its houses were actually built. The process was surprisingly chaotic, taking around twenty years though each house was finished in just six months.

The Estate has no sense of being enclosed, thanks to wide interior roads and low rooves, the result of Chiswick’s first modern urban planning regulation.

Signature decorations on the outside of each house reveal where one builder’s work starts and another’s ends.

Images above: Architectural detail of the houses in Reckitt Rd and Duke Rd (R Szwagrzak)

Posh architects sometimes sneer at these features, cut-price copies of styles borrowed from great houses adorning residences untouched by RIBA. But since every detail was a cost to the builder, we know they were intended to boost rents income from more discerning tenants.

As such, the Glebe’s terraces represent a pattern book of popular working class taste between 1870 and the early 1890s. This is valuable information for the historian of Victorian working class culture since, unlike wealthier folk, they had little spare time to write journals of their likes and dislikes for posterity .

What Conservation Area Status Means for the Glebe

If adopted, LB Hounslow’s proposal to designate the Glebe Estate a conservation area will come with certain restrictions to Permitted Development and additional planning scrutiny: removing the right to erect satellite dishes on walls facing the street, for instance, or to cut down trees above a certain size.

They will protect the Estate from the government’s proposed radical removal of local planning controls by designating the Glebe a ‘Protected area’. Without this, the Estate will most likely be listed for ‘Renewal’, and so vulnerable to ‘gentle densification.’ That could mean less garden space.

Some older residents remember when the Estate’s back gardens were home to cart horses, wheelwrights and laundresses. Aerial photos from 1935 show strings of drying white sheets lighting up the Estate’s interior.

Today some residents have built small offices in their back gardens, others during Covid lockdown realised they were urban ecosystems brimming with wildlife. In last summer’s socially-distanced heatwaves children had camping holidays in those same back gardens or shared family picnics there. In our enforced slowdown we learned to appreciate the value of our own little outdoor spaces, so prized by Victorian ‘artizans’ 150 years ago. Now there is the chance to conserve them for future generations of residents and historians.

See also: WW1 – How Chiswick fared in the Great War

Hear first hand from Kelly O’Neill about how Covid is affecting LB Ho...

Jeremy Vine and his penny-farthing bicycle
Scroll to top