Homelessness has administrative gradations with words like “sofa surfing,” which sounds sort of sporty and fun, but isn’t.

This article is about rough sleeping – rock bottom in the social hierarchy of homelessness. And although a pretty accurate description – it’s certainly rough, the circumstances are not conducive to sleep.

Some local rough sleepers report being beaten, urinated on and verbally abused when they are already struggling with serious health issues.

An estimated 4,677 people a night are sleeping rough in England although these figures are unreliable as Hounslow Council’s head count, for instance, is made during office hours, when most rough sleepers are invisible, either keeping warm in a place like their local library or at work.
I went to meet guests and volunteers at the Shelter Project in Chiswick’s Christ Church. This operates a rolling night shelter service in 10 churches in Hounslow from December through to the end of March whereby guests sleep in a different venue each day.

Helle, a translator by day, becomes Pants Lady at night! 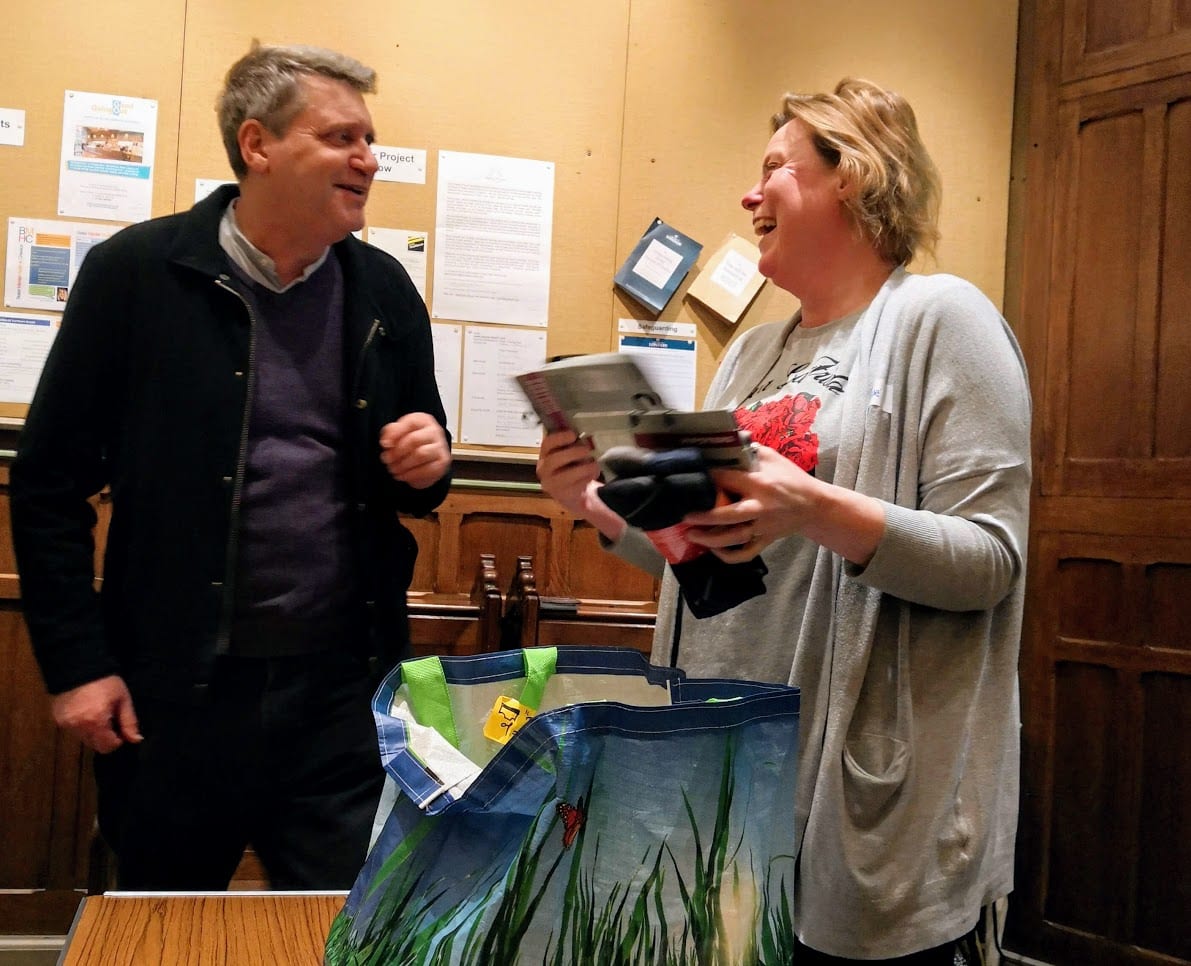 Helle – aka Pants Lady with Peter, a volunteer

“About five years ago we had a guest who was incontinent. We didn’t have pants and socks, so I started collecting. I put a Facebook post out and created a superhero called Pants Lady and I got about 300 pairs the first year.

I hand them out to the guys here or other shelters, or even people on the street. What we really need is safety shoes, or good trainers, coats, jumpers. Pants Lady will take it all!”

“I thought I’d come here and feel good about myself. But you realise these guys are nice people and I enjoy their company.”

It does not take a lot to become homeless. Helle estimates it takes around three months for someone to end up on the street.

“A guy came in who was a property developer in Chiswick. He came in to donate some money and sat and talked to one of our guests. It turned out they both liked The Bees (Brentford’s football team) and they found they had other interests in common. Then the conversation turned to “And what do you do?” and the guest replied “Oh, I used to be a property developer”.

So how had he come to sleep rough? He explained, “I got divorced, started drinking…”

Often the rough sleepers’ families don’t know they are homeless. Neither do their employers –several at the shelter were painters and decorators. They may have painted your house – one was working in a property in Grove Park.

Although they are safe, fed and warm at the shelters there is only one church in the rota that can provide a shower. The churches were not built to accommodate people so the men can’t get their washing done either although there were radiators to dry their socks on. 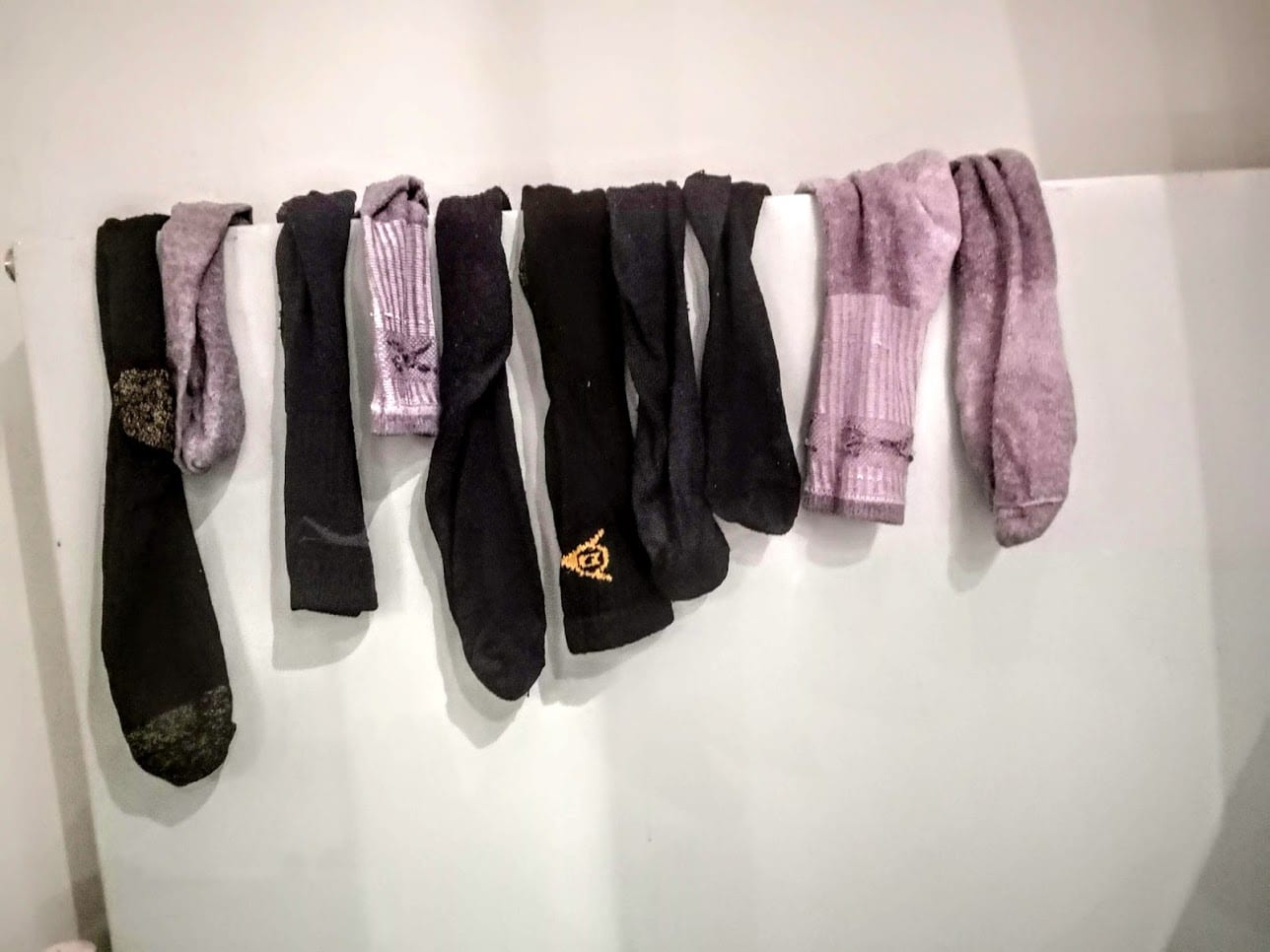 Helle “It’s hard not to take their problems home with you. They are good guys, they shouldn’t be out there.”

Cedric works in tourism and has been volunteering since 2012. He stays all night. “The men have their last smoke at around 10 then get a good night’s sleep. Then get up, have breakfast and leave about 8 –some have to go to work.”

“I come from Barbados, so anything below 20 degrees is cold! It’s tough living on the streets. I wouldn’t survive out there. 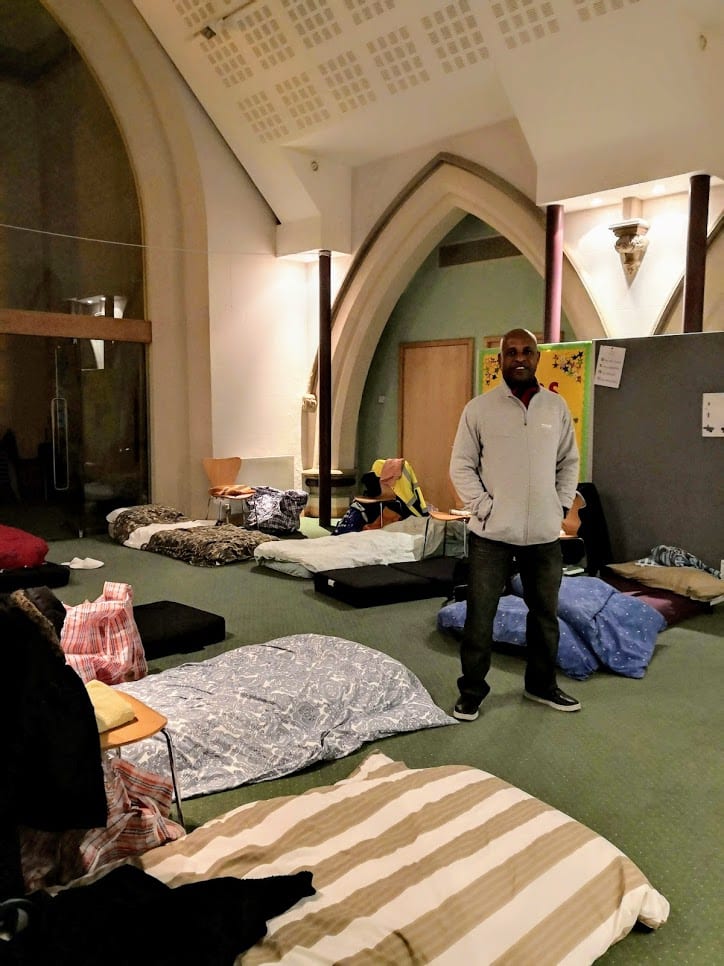 Cedric in the makeshift sleeping area upstairs in Christ Church.

“I have heard some hard luck stories. People from the continent who have been robbed or lost their passport. So many things can go wrong. It could be a broken marriage, some have mental health problems, and some drink a lot. One guy from Asia had broken up with his girl and had a breakdown and refused to go home. Some have lost their job and can’t afford the rent or just can’t keep up with payments if they have a low paid job.”

A guest, who I’ve called Jack to protect his identity, comes from Brentford, and has recently got a job, but cannot afford his own place and was assessed as being vulnerable. He had come to the shelter with his new teddy bear Bart to keep safe.

“I’m upset Helle has taken my teddy bear away from me because I won’t eat my broccoli!* My girlfriend brought it to me in hospital as I was having trouble with my kidneys and gallstones. I was accepted by Raj (the Shelter Project co-ordinator), otherwise I would have slept out on the streets.

“They are very lovely people here, genuine, helpful. Helle helped me out when I was in pain. She is a lovely woman. At bedtime I come here and have a meal and go to sleep. I’ve got a job in a delivery office in a warehouse in Slough, so I go there after breakfast. My hobbies are paint balling and go karting.” *Jack was given Bart back, despite not eating his vegetables. 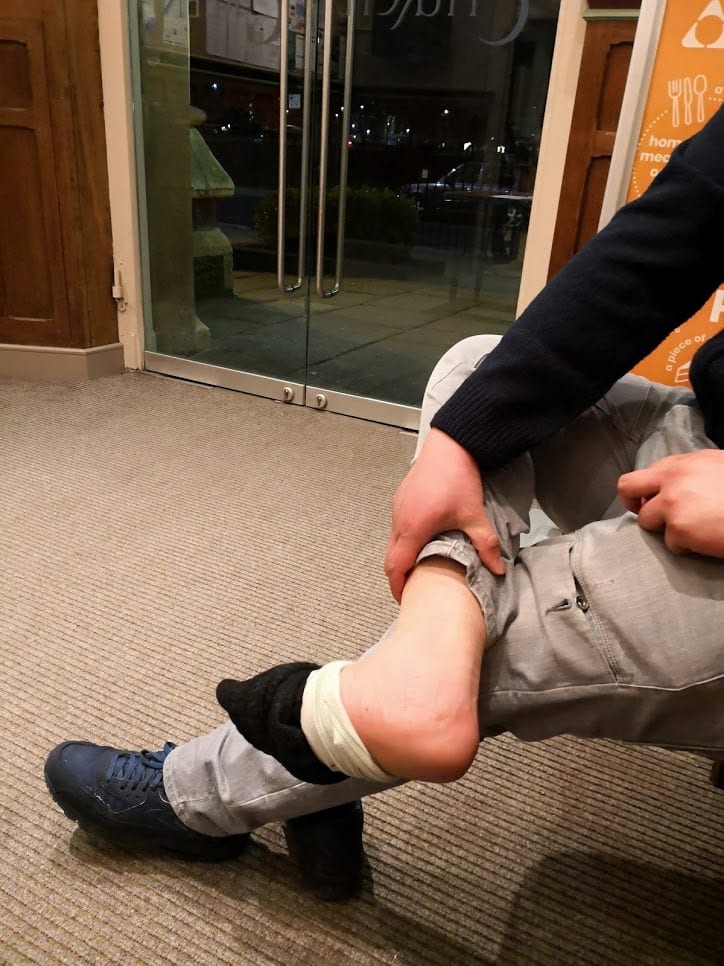 A guest who wishes to remain anonymous, so will be referred to as Al, came over from Algeria in 2007 when he was 18. He was visiting his sister with his Mum and Dad.

He met his then girlfriend and did lots of different jobs, including being a chef, a customer services operator in Poundland and working in Travelodge.

“But then I started doing heroin. I am 30 years old and am three years clean now, off heroin and on Methadone. There was a fire in my home in 2016 and I jumped from the second floor and smashed my foot. It was really bad. I had to stay in hospital and had six operations. I couldn’t score in the street, so now I am on Methadone.”

Al was referred by St Mungo’s. Their report this month* states that spiralling housing costs, increasing insecurity for private renters and cuts to homelessness services have seen rough sleeping more than double since 2010.

Their analysis of government statistics shows that between 2011 and 2017 rents in England grew 60% quicker than wages. Meanwhile, welfare reforms have made renting from a private landlord increasingly unaffordable for households who rely on housing benefit to help pay their rent. In the private rented sector, housing benefit is only paid up to the rate of the Local Housing Allowance (LHA), but there is no requirement for landlords to let their properties at this level.

“This is my second year here.” Explains Al, “I feel safe here. We eat and we have a nice sleep. Outside in the night time is very dangerous. There can be fire, fighting, you can die. Look at my face. Every day I have problems, stupid things, someone is drunk and they are rude and so there is a lot of fighting.

“I go the library in the day to keep safe. I don’t trust anybody. All of my clothes are from the shelter. Now I have got some people helping me get my permit to work. It’s hard for me. I’m in a mess but I hope to do something. I was a window cleaner in my last job, doing retail windows in Chiswick and Shepherds Bush. I was self-employed and I am good at making a little bit of money to survive, it’s just I can’t afford £500 rent. I would go back to Algeria if I had enough money to go back and start a business.” 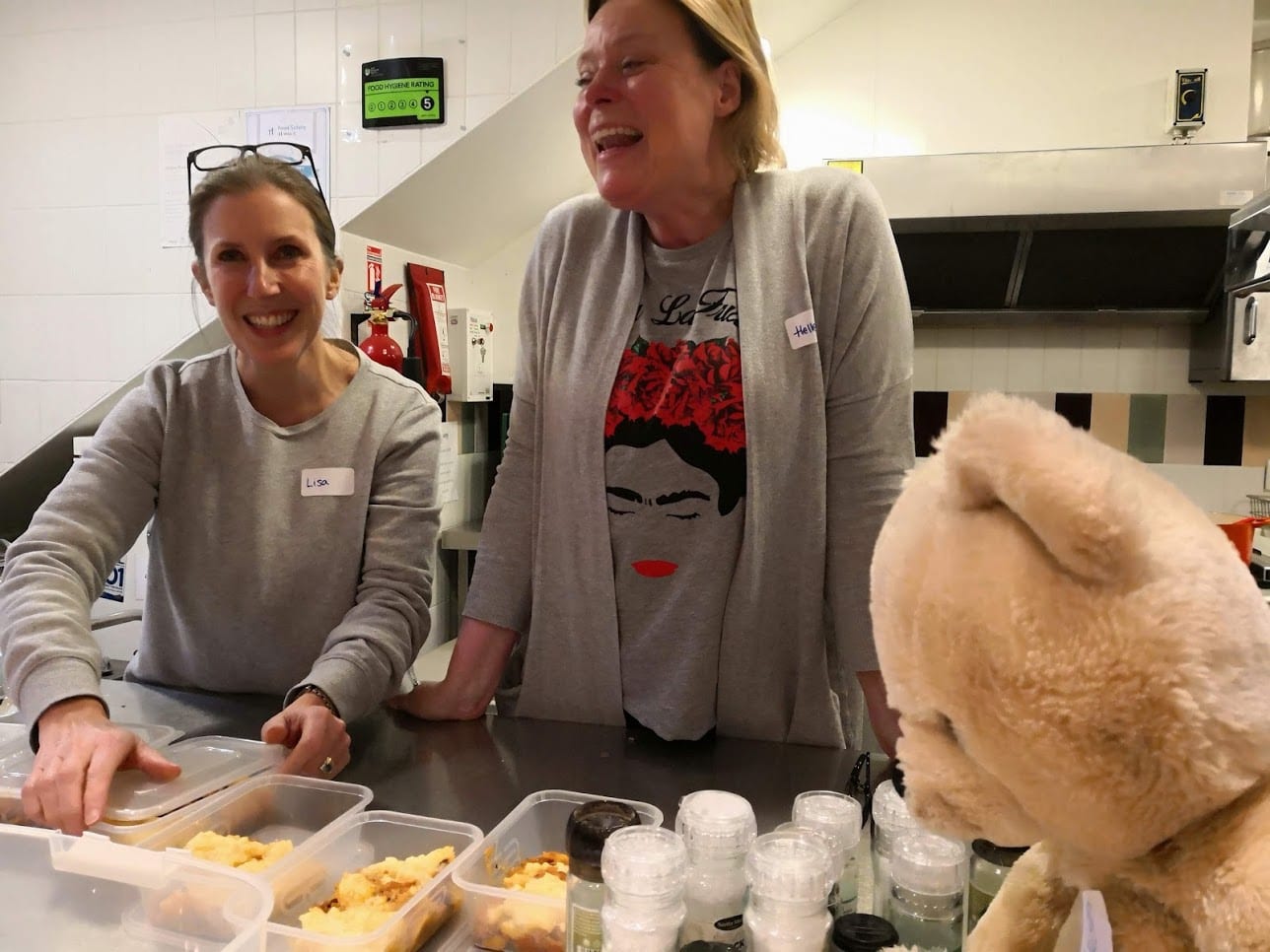 Lisa and Helle preparing food for the guests while holding Bart (right) hostage to encourage Jack to eat his vegetables.

TSPH began in January 2012 and is now in its eighth season, with 10 churches from across Hounslow taking part.

Guests are screened including an in depth interview for the safety of the volunteers, who are ordinary members of the public and to protect the other guests. They must be local, low to medium needs, and are not allowed to bring alcohol.

Raj, the co-ordinator says “This year I can report that we have very few men with traditional substance abuse – what we do have is a group of men that have hit rock bottom and are now trying to get back on their feet. There needs to be a joined up approach to solving their problems, which can only be possible with the help of the local council. Representatives from Hounslow Council are visiting our shelter early next month.”

Last year a total of 31 men came through their shelters, with the total number of helped with either housing, rehabilitation, training or employment being 21. Two guests died during 2017/2018.

In December 2018, for the first time, the Office for National Statistics published data on the number of people who died while sleeping rough or in emergency s accommodation which homeless charities claim is up 24% compared to 2013. Overwhelmingly, these deaths are premature (the average age of death for people who died while homeless in 2017 was 44, for women it was just 42) and entirely preventable. tsph.org.uk

Have you heard a music track called Chiswick Days?
Scroll to top