Images above: Tabard theatre at the Tabard pub

The Tabard’s theatre space is reopening in Chiswick, above the Tabard pub on Bath Rd, under management which is at the same time both new and old.

Simon Reilly, who was the theatre’s general manager from 2008 – 2019, will be running it with his wife Sarah. They have formed a new company, Take Note theatre, and have signed a ten year lease with owners Greene King to run the studio space, which seats just under 100 people.

Simon used to work with Fred Perry, whose company Sightline held the lease previously. Simon left in 2019 to take on the role of production manager at a drama school in Islington. Fred rebranded the theatre as the Chiswick Playhouse and it survived the pandemic, but his lease was not renewed by the pub chain in January and the theatre closed its doors mid March.

Images above: Simon and Sarah Reilly

They started looking for theatre premises, but had not found anything by the time Covid hit. They started looking again at Christmas 2021 as things began to get back to normal and applied, along with many others, when the Tabard studio space came on the market in January.

“We went to the open day and looked around in February and made a presentation to a panel which included several people from Greene King [including pub manager John Higginson] and we are delighted to have been offered the lease”.

Simon plans to run the theatre much in the way he ran it before, with a mix of productions for children and adults, one nighters for comedians trying out new work, talks and tie-ins with local community events such as the Bedford Park Festival and the Chiswick Book Festival.

He worked as marketing manager for the Hackney Empire before he became general manager at the Tabard theatre.

Sarah has a background in fundraising in the arts. Her first job in theatre was at the Orange Tree in Richmond as fundraising manager. She has since worked for Roald Dahl’s Marvellous Children’s Charity as a fundraiser and has “dabbled” in theatre production. She will be looking at grants they can apply for.

The two met when they were students at Leicester University – Simon studying Economics and Law, Sarah studying English. They got to know each other during a production of Shakespeare’s As You Like It (in which Sarah played Rosalind) which they took to a Shakespeare festival in Lithuania.

They now have a nine year old daughter, Alyssa, who was with them at Green Days fête over the weekend handing out flyers.

“People were delighted that there will be a theatre in Chiswick again” Sarah told us. “It was quite an uplifting day seeing all the enthusiasm for the theatre and we are very conscious it is not really our theatre, it belongs to Chiswick.”

Pub manager John Higginson has told The Chiswick Calendar how pleased he is that Simon and Sarah will be running it.

“We were blown away by their presentation” he told us.

Dame Siân Phillips to perform at the Tabard in September 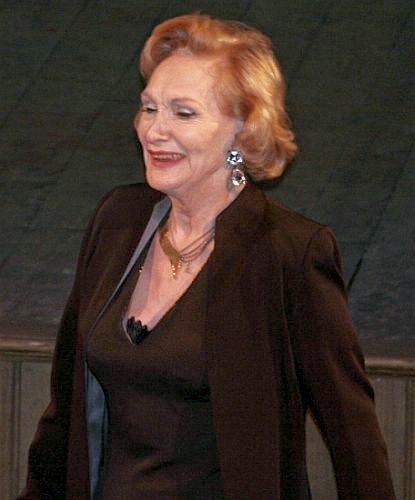 Already they have a big name to brag about. Siân Phillips has agreed to do a two-hander with Stephen Greif, Just A Little Murder, on Sunday 25 September.

The multi award-winning actor has  performed the title roles in Ibsen’s Hedda Gabler and George Bernard Shaw’s Saint Joan and is known for her performances in many TV dramas, from Livia in the BBC’s adaptation of Robert Graves’ novel I, Claudius in 1976 to Lady Yvette Bristow in the TV series based on JK Rowling’s detective novels, Strike in 2017.

She has won BAFTA  and Royal Television Society awards, been nominated for a Golden Globe, a Tony and several Olivier awards and was made a Dame in the 2016 New Year’s Honours list.

Sarah and Simon are already working with local playwright Nick Bromley and stage manager Sandra Szaron, who will be working with them as a creative associate and they are looking to appoint a duty manager.

They plan to open the doors in July with some pre-Edinburgh festival shows and hit the ground running with a full programme from September. If you would like to join their mailing list to be updated with productions as they book them in, you can sign up through their shiny new website.