Strand on the Green

One of the most picturesque areas in West London, Strand on the Green is packed with places to explore, watersports to master and pubs and cafes to eat and drink. The area is nestled along the north bank of the Thames from Kew Bridge over to Grove Park, and is well trodden by history buffs, runners and foodies alike. Delve into the rich heritage and fine dining of this iconic part of London.

Strand on the Green is one of Chiswick’s four former villages, the others being Little Sutton, Turnham Green and the area around St Nicholas Church (old Chiswick). Human presence in the area has been dated back some way – in the 19th century a number of skulls were found in the river and were identified as belonging to around 600BC, and Roman pottery has been found there.

The name itself is likely taken from ‘Stronde’ meaning ‘shore’ as it was a fishing village until industrialisation unified Chiswick’s villages and made it a suburb. It has been known variously as Strand Green and Strand under Green. The first houses and wharves formed no more than a line along the foreshore and over time other river businesses set up alongside the fishermen.

Image above: Strand on The Green in the 19th Century, image courtesy of Panorama of the Thames

Various members of the nobility and gentry settled in the area from Tudor times and in the 1700s the Strand attracted both city merchants and hangers-on of the Hanoverian Georges, who spent much time at Kew. All these elements intertwined to create a prosperous community.

The opening of Kew Bridge in 1759, and the presence of the royal family at Kew Palace caused a further increase of popularity, and further encouraged wealthy people to build locally.

However, while Strand has enjoyed prosperity for much of its existence, it has not been without hardship. When the Grand Junction Canal diverted freight traffic to Brentford, and the Royal Family moved to Windsor Castle in the 1800s, the area fell out of fashion and fell into a period of decline.

Furthermore, in World War Two a parachute mine destroyed 41 houses on the Thames Road, causing major emotional and financial hardship for the community.

Nonetheless, Strand on the Green’s significance was set in stone as a result of the 1947 Town and Country Planning Act which listed just under 40 buildings as having special architectural or historical interest and saw a resurgence from this point on.

For the rest of the 20th century, the area gained some exposure on the big screen. Hawk-eyed Beatles’ fans may have noticed that the embankment and City Barge both feature in the 1965 film Help! as the fab four escape an eastern cult. The 1969 version of Goodbye Mr Chips also used 59 Strand on the Green as a filming location for Katherine’s home. 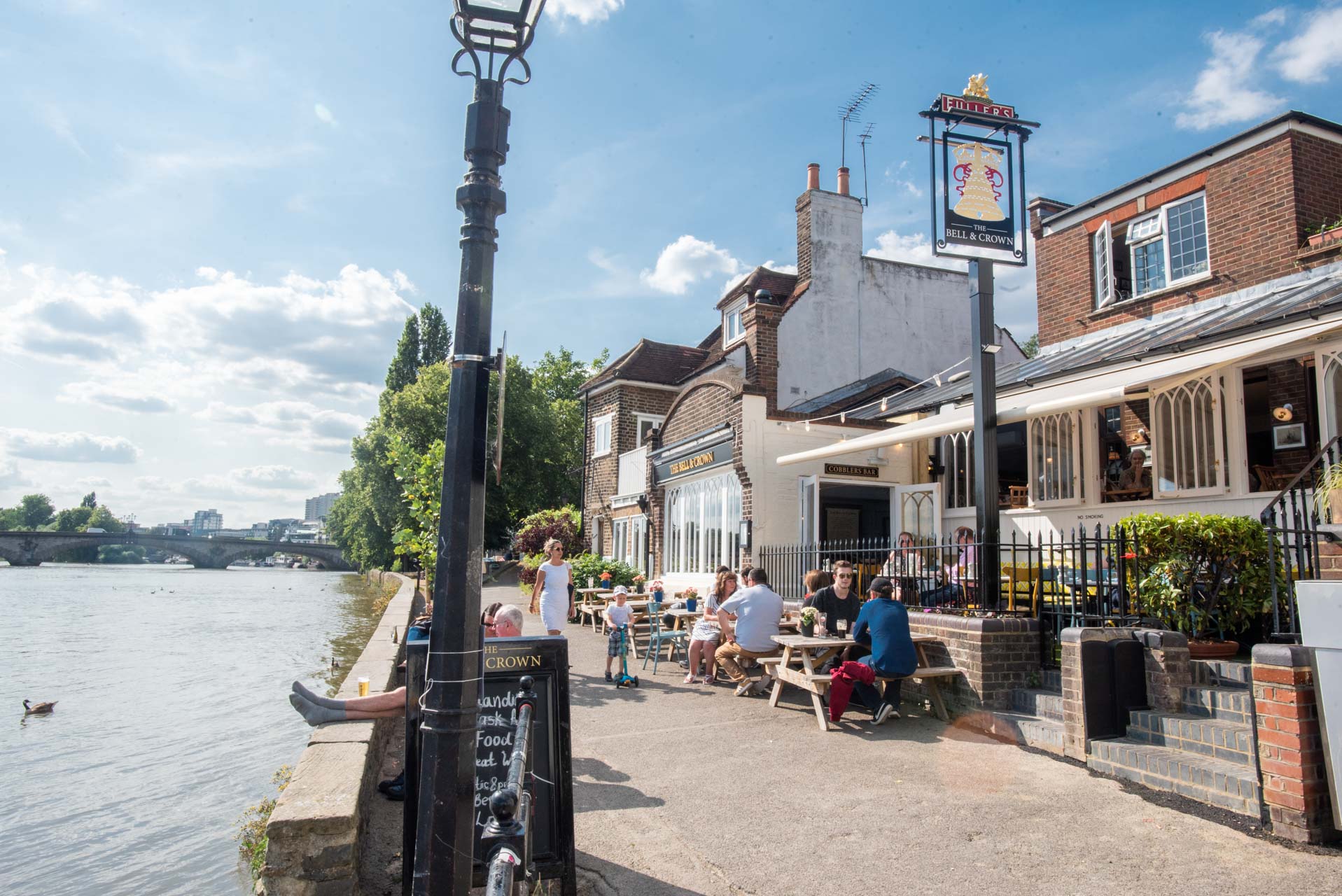 Image above: The Bell and Crown

Aside from its picturesque views of the Thames, Strand on the Green is well known for its multiple pubs, cafes and restaurants.

Close to Kew Bridge is the Bell and Crown, a roomy 18th-century pub, conservatory and restaurant. It has the aesthetic of a country pub with a great selection of beers, which are allowed to be taken outside for those wishing to sit on the embankment overlooking the river. Better yet, The Bell & Crown is offers Chiswick Calendar Club Card holders 10% off food and drink at any time, providing you have a main meal.

This includes their weekend breakfast menu (9.00 – 11.30 am, Saturdays and Sundays). You can choose from a Full English Breakfast, Eggs Benedict, Smoked Salmon and Scrambled Egg on a bagel or Smashed Avocado and Poached Egg on a bruschetta. For lunch and evening menus have a look here.

A stones throw from here is the Steam Packet, the youngest pub to have set up in the area. A sister branch to The Roebuck on Chiswick High Road, The Steam Packet spans two floors and has an excellent selection of drinks from craft beer, real ales to Japanese whisky and a varied wine list, so there is something for everyone’s taste. They’re offering 15% off 7 days a week to Club Card holders. 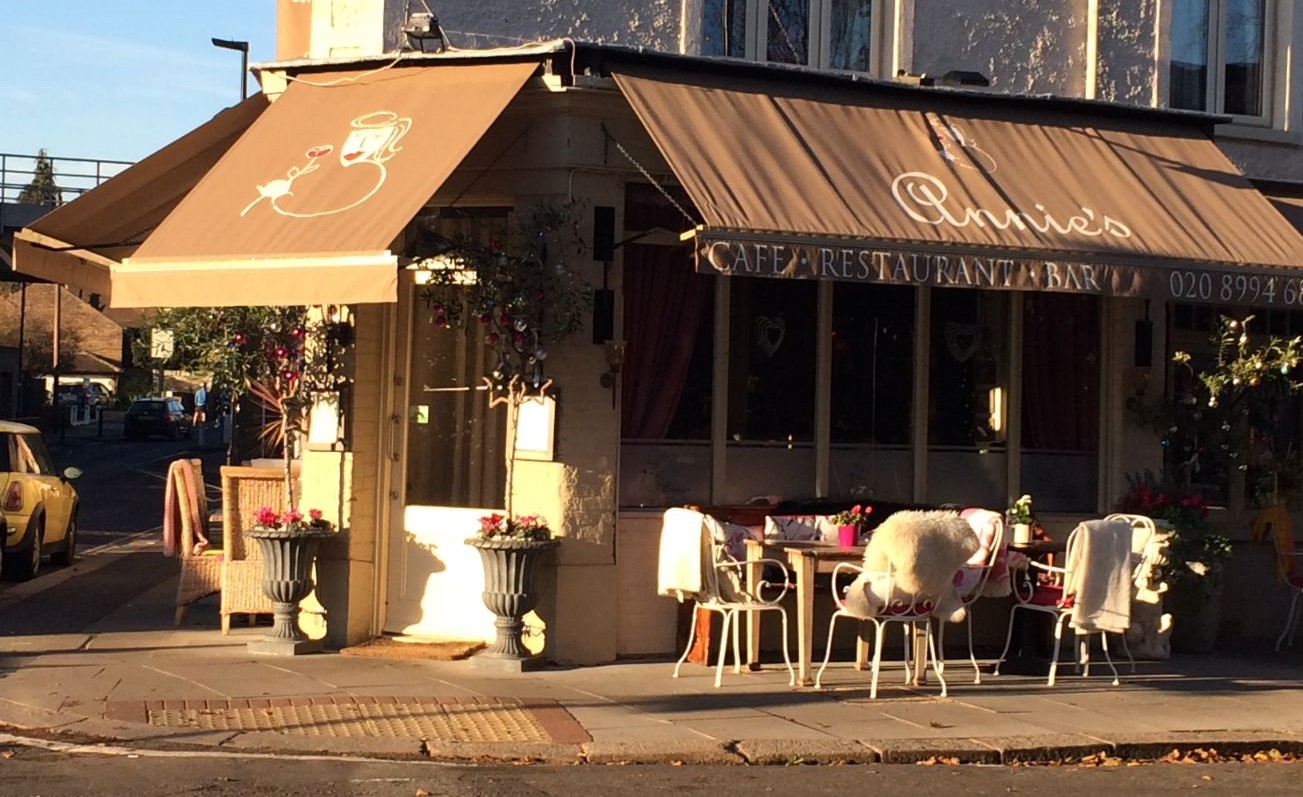 Further down the river are two more great pubs; the City Barge and the Bulls Head. The City Barge is a 14th Century pub serving a wide range of drinks, including seven rotating hand pull ales and an extensive wine list. You can choose to enjoy any of these in the panelled dining room, traditional bar or simply sat outside, by the river.

Closest to Grove Park, The Bulls Head is a Grade II listed 18th century inn. There has been an inn on the site for over 400 years, and legend has it that Oliver Cromwell, after whom Oliver’s Island opposite is named, used the inn as a base, although the evidence for this is disputed. The Bull’s Head serves runs a popular Fizz Friday, with £12 bottle of Prosecco all day.

Annie’s restaurant on Thames Road has been a local favourite for many years, serving Mediterranean and British cuisine amid rich and eclectic vintage furnishings. Owner Lorraine Angliss learned the restaurant trade from her Spanish mother and ran the Rolling Stones’ restaurant Sticky Fingers in Kensington before setting up Annie’s at Strand on the Green, the first of several restaurants she now owns. Annie’s offers 10% to Club Card Holders from Monday to Thursday. 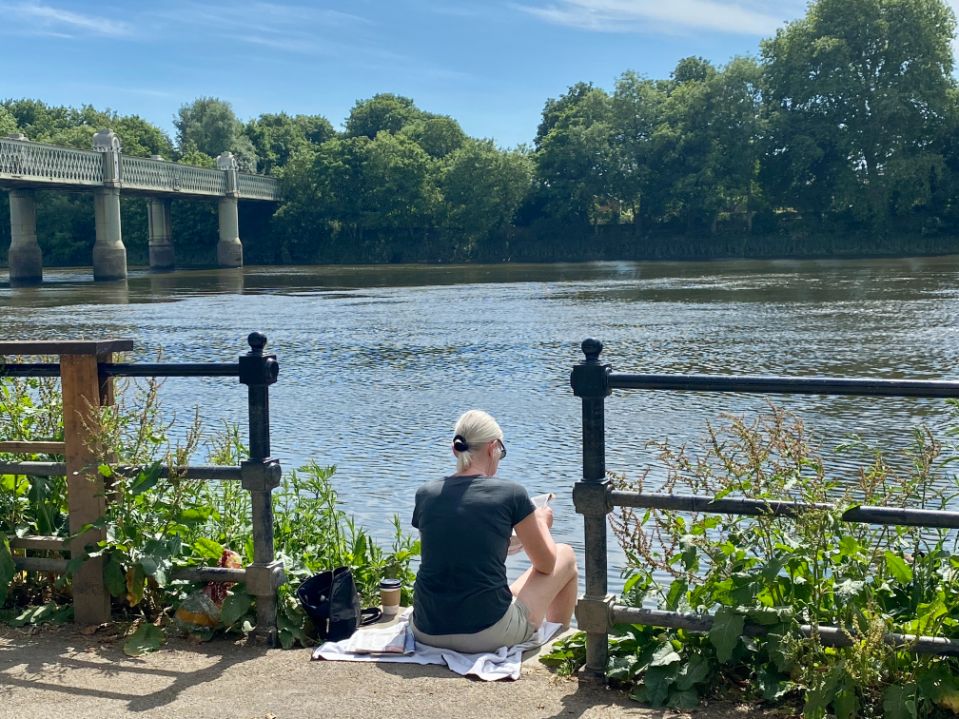 Image above: one of the many places to relax along the embankment

A must-do activity for visitors to the area is paddleboarding by Kew Bridge. Active 360 takes beginners out to teach them how to do it and gradually allows people more freedom once they have gauged the person’s level of skill. Trips and lessons head towards Hammersmith or Richmond, depending on the direction of the tide; either way you will get fantastic views of West London from the Thames.

Owner Paul Hyman is well respected for his environmental work in the area. Paul is at the centre of the campaign to clean up the River Thames, urging pubs to stop using plastic straws and single use plastic beakers because every day he sees the ‘River of Trash’ which results. 65% rubbish taken out of the Thames is food and drink packaging.

Paul organizes paddleboarding clean-up sessions on the Thames and in London’s canals, which he tells me have become popular with City types ticking the Corporate Social Responsibility box. You can read more about Paul’s work here.

In September each year the Thames Tidefest is held at Strand on the Green to highlight and celebrate the recreational importance of the Thames Tideway to Londoners. Part of the wider Totally Thames festival, punters can expect to take part in anything from mudlarking to kayaking to watching live music.

The area is also very popular with runners, although the path can get very congested in the evenings so the Thames Road just behind can be a good alternative.

Those willing to venture out can check The Chiswick Calendar’s Tide Timetable, which is also very useful for pubgoers not wanting to get their feet wet (as I have many times).

Video above: The Chiswick Calendar’s visit to Active 360 in February 2019