What do these places have in common with Chiswick?

Many of the ten full time and 70 volunteers at  Chiswick RNLI lifeboat station are, or have been, on the crew at lifeboat stations in these coastal towns. In between 12 hour shifts in Chiswick some of our crew who volunteer on the coast have been involved in harrowing rescues of desperate people at risk of drowning while endeavoring to cross the English Channel.

Following some criticisms of this life-saving work in national and social media The RNLI’s chief executive, Mark Dowie issued a statement:

‘I could not be prouder of our amazing volunteer lifeboat crews, who launch to the aid of anyone who is in trouble in or around the water and needs our help. We have done this since the RNLI was founded in 1824 and this will always be our ethos.

‘Every year, our lifeboat crews and lifeguards rescue around 30,000 people. We do not judge a casualty on what circumstances have found them in trouble. Our crews are tasked by HM Coastguard in the UK and the Irish Coast Guard in Ireland to rescue anyone who is at risk of drowning. They go home after a shout secure in the knowledge that without their help, the person they rescued may not have been able to be reunited with their own family. That is why they do what they do.

‘These same principles apply to our lifesaving work in the Channel. We do not judge those we rescue – where we believe there is a risk to life at sea, we will always launch in response to a call from HM Coastguard. We want to be absolutely clear that we are incredibly proud of the work our volunteer lifeboat crews do to rescue vulnerable people in distress.

‘When our lifeboats launch, we operate under International Maritime Law, which states we are permitted and indeed obligated to enter all waters regardless of territories for search and rescue purposes. And when it comes to rescuing those people attempting to cross the Channel, we do not question why they got into trouble, who they are or where they come from. All we need to know is that they need our help.

‘Our crews do what they do because they believe that anyone can drown, but no one should. They believe in and remain focused on our core purpose, along with every member of the RNLI, to save lives at sea.’

Crews proud of the work they do

The picture postcard image of lifeboat stations in coastal fishing villages with a small group of dedicated volunteers operating independently is far from reality. Crew often join another station when their day job moves. When the RNLI launched Chiswick Lifeboat station in 2002 the ten full time crew and the initial group of volunteers were recruited from around the country, including many stations on the English Channel.

Lifeboat crew from all over the UK and Ireland mix with each other while training together at the Lifeboat College in Poole. Just as useful as the formal instruction and assessments are the informal interactions where crews get to understand the different challenges faced around the country. When on shift at Chiswick we are often visited by RNLI crews from other stations and exchange tales of our rescues; the most memorable was from four wonderful characters from Courtmacsherry in Ireland who make an annual tour of RNLI lifeboat stations. 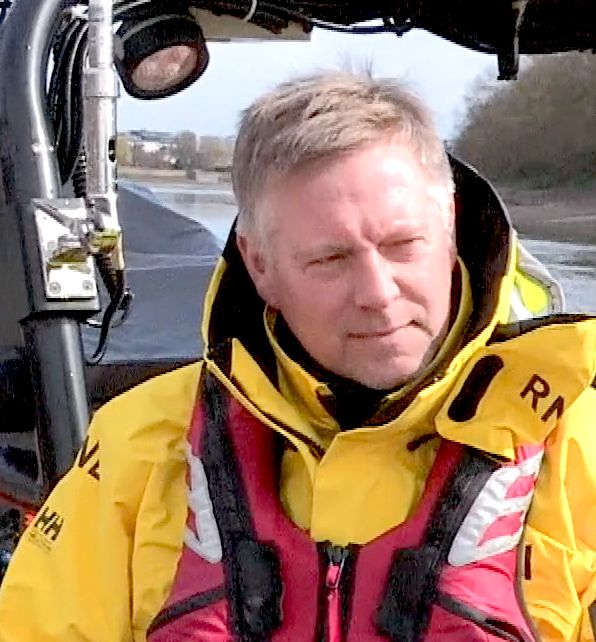 ‘All lifeboat crew are proud of all the lifesaving work done by their fellow RNLI volunteers around the country. At Chiswick we have heard first hand from some of our team of the challenging rescues they have been involved in, maintaining the RNLI’s 197 year old humanitarian ethos of saving those in trouble at sea, however they got into difficulties’

‘I have been a rescuer for 35 years, seeing over 5,000 incidents where lives were at risk. There have been occasions where some have questioned the validity of these taskings, if we should rescue drunks, people attempting suicide or those who were not properly prepared and did not respect the water.

‘Never have I witnessed any crew question the legitimacy of saving any person, it is an ethos at the heart of everything we stand for. The Titanic disaster resulted in the creation of the SOLAS (Safety Of Lives At Sea) convention which still stands today, and most of those who lost their lives that night in 1912 were people migrating.’

RNLI lifeboat station is the second busiest in the UK and Ireland. Since the RNLI search and rescue service on the Thames started in 2002, Chiswick Lifeboat has attended over 3,900 incidents and rescued over 1,750 people. The RNLI is entirely funded by public donations. If you would like to donate, please follow this link:

David Clarke is the volunteer Press Officer for Chiswick RNLI, himself a former Lifeboat Crew member.

See also: A new recruit enjoys her first day out with the RNLI