Plans to erect a tower block on Chiswick Roundabout have been submitted to Hounslow Council, with the new design adding three storeys to to the original proposals published earlier in 2021.

The planning application from Starbones Ltd is for a 24-storey building called Holly House. The original design submitted was for 21-storeys.

Residents have already raised concerns about the impact Holly House would have, especially on views from Strand on the Green and Kew Gardens. The developer argues that the building will be barely visible above the tree canopy in Kew Gardens and that the structure will ‘break the monotony’ of the line of commercial buildings visible from the riverside.The proposed development, designed by architects Simpson Haugh, will have commercial space on the lower floors with ‘affordable housing’ above, starting on the third floor up until the 12th floor where the private flats will begin.

Developers have previously sought planning permission for several projects at the vacant site now proposed for Holly House, the most recent being the 32 storey ‘Chiswick Curve’ in 2019, which was rejected by the council. The Chiswick Curve was opposed by Kew Gardens and Historic England, along with an array of residents groups, but backed by an inspector after a Public Enquiry, only to be turned down by the late Secretary of State for Communities James Brokenshire. It went all the way to the High Court, which upheld the  Secretary of State’s decision.

Image above: CGI of Holly House overlooking Strand on The Green – by Simpson Haugh, the ‘Chiswick Curve’ which failed to gain planning permission.

What is being proposed?

Overall there will be 21 floors of residential accommodation comprising 255 flats, 83 of which will be classed as affordable. Of the ‘affordable’ units 70% will be London Living rent and 30% will be intermediate.

The building will also have 2.5 storeys for parking and bin storage at the basement level. There will be over 300 cycle parking spaces but the documentation submitted with the application does not make clear the total number of parking spaces, though a stacked parking system will be available which will allow two cars to be parked in one space.

Images above: CGI of Holly House, the proposed advertisement billboard – by Simpson Haugh

At the base of the building there will be office space from ground and mezzanine to the third floor level. The developers envisage this may become service office space for microbusinesses. An LED advertising screen is proposed, running around the southwestern corner of the building facing traffic travelling along the M4. This screen measures 4m high, with an overall width of 17m.

The south facing side of the building which overlooks the M4 will aim to have a ‘garden wall’ effect using the planted terraces on every third storey. On the top level there will be a roof garden under a domed glazed canopy, which residents of the private flats will be able to access. 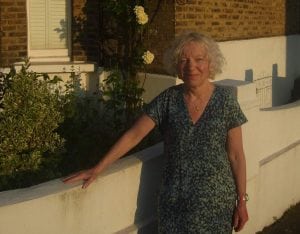 Marie Rabouhans, Chairman of the West Chiswick and Gunnersbury Society, told The Chiswick Calendar the new proposals were “disappointing, to put it mildly.

“Earlier this year they gave some presentation and it was then only 21-storeys. It’s now 24? So, you know, what is the reason behind increasing it?

“As I’ve said it goes beyond disappointment. I don’t know exactly but I think approximately the new building is meant to be 90 metres whereas The Curve, which was finally refused by Secretary of State, was 120 metres. So we’re getting into the realms of the height of The Curve.

“There are so many issues with Holly House. Just one of them is the trees which you have sprouting from the balconies, how realistic is that? One of the problems is the site itself is very small and this is a critical thing.

“The site is a small triangle surrounded by very busy roads and the Chiswick Roundabout. The foot print of the building covers the whole site, so it’s right up against the M4 on one side and against Gunnersbury Avenue on the other. We think it’s totally impractical to actually attempt to grow trees on those little terrace balconies.

“Another thing we have commented on in the past is that there shouldn’t be any advertising on the building. [Referring to the 17m LED proposed advertisement board] it doesn’t look that big compared to the whole building but that is still enormous. We think that is quite inappropriate.

“When it boils down to it we think that site shouldn’t have any residential [properties] because of the pollution, the noise and air pollution. We don’t think that site is fit for human habitation.”

Image above: the proposed site at for Holly House at Chiswick Roundabout

You can find the planning application on the Council’s website here: planning.hounslow.gov.uk

Hounslow Council’s reference for the application is P/2021/3510.