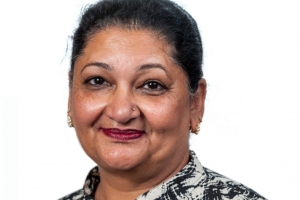 “It is with great sadness that we learnt at the weekend of the sudden death of Councillor Poonam Dhillon after a short illness. This has been a tremendous shock to Cllr Dhillon’s family, friends and fellow councillors, as well as residents she represented in Cranford ward.

“Cllr Dhillon had served as a councillor for Cranford ward between 2006-2014, she was appointed Deputy Mayor in the municipal year for 2010-2011 and then subsequently re-elected in 2018 in Cranford. She also served on numerous committees and was an active backbencher.

Cllr Dhillon was a well-known and well-liked councillor, who served her community with distinction, she will be missed by all. On behalf of the Council, I would like to offer our sincere condolences to Cllr Dhillon’s family and friends, and fellow councillors”.

Ruth Cadbury, MP for Brentford & Isleworth, also worked with Poonam for many years.

“So sorry to hear of Poonam’s passing. She was a kind, cheerful and loyal colleague of mine for 8 years and will be sorely missed” she said.

Nursery staff and parents worried about safety of nurseries