Peter Humphrey, a former journalist and private investigator who was arrested and jailed by Shanghai Police in 2013, says he is “thrilled” at the news that the UK’s broadcasting regulator Ofcom has stopped Chinese TV company CGTN from broadcasting in Britain.

China Global Television Network (CGTN) is an international English-language satellite news channel which is based at Chiswick Business Park. It is run by China’s state broadcaster, which is ultimately controlled by the Chinese Communist Party, but it was licensed in the UK under the name ‘Star China Media Limited’.

After an investigation instigated by Peter, Ofcom has withdrawn the company’s licence to broadcast in the UK. Peter was imprisoned for 14 months in Qingpu prison. Prior to his trial he was forced to record interviews with an interviewer working for the state broadcaster, in an attempt to force a confession.

In an interview with Matt Smith for The Chiswick Calendar, Peter talks about what the ruling means to him and how his campaign against CGTN eventually forced Ofcom’s hand to revoke their licence.

Image above: Peter during one of the media appearances he was forced to endure during his detention.

Peter, along with his wife Ying, was detained following allegations he illegally acquired personal data of a Chinese citizen with connections to the Shanghai communist elite.

After a day-long interrogation in a subterranean room in the Shanghai PSB headquarters, Peter was tossed into a cell with 12 other detainees in the middle of the night. The detention centre cell was a small unfurnished cell, some 15 square metres for 13 cellmates.

He spent 14 months detained, undergoing two humiliating media interrogations whilst awaiting trial, which he has described as severely traumatic experiences which still haunt him to this day.

“We were put inside of a cage, a locked cage, with our hands cuffed and then locked in a chair within the cage wearing a prison vest without even being indicted of any crime when that had happened. That’s what the complaint was all about” Peter said.

“When I was released in June 2015 from China I was diagnosed with cancer, advanced cancer of the prostate. I had to spend a couple of years in treatment and I also had very severe PTSD; I’ve been in and out of treatment ever since. I had a number of other physical problems, damage to my body and my health.

“My whole life had been smashed to pieces and me and my family needed to be, somehow, rebuilt. There was a huge amount of wreckage to our life. I wasn’t even thinking about things [like Ofcom] at the time, I was too busy trying to save my life from cancer and clear the wreckage that had been caused by our ordeal.

Start of the fight

In May 2011, Ofcom ruled that Press TV, an Iranian English-language satellite channel, was responsible for a serious breach of UK broadcasting rules and could face a fine for airing an interview with journalist Maziar Bahari that was obtained by force while he was held in a Tehran jail.

Peter met with a researcher who specialised in China and was researching the issue of how confessions were used in the Chinese judicial process. She used him in a case study in an academic paper, which then led to the human rights organisation, Safeguard Defenders, using Peter’s story in their book ‘Trial by Media’ about forced televised confessions.

Safeguard Defenders is a human rights non-governmental organisation founded in late 2016 that undertakes and supports the protection of basic rights, promotes the rule of law and enhances the ability of local civil society and human rights defenders in some of the most hostile environments in Asia.

After consulting with lawyers, Peter drafted a complaint to Ofcom which was submitted in November 2018. The complaint was all about the forced televised confession process to which he and his wife had been subjected.

“After a long drawn out process, in July 2020, after taking longer than they have ever taken with any complaint, Ofcom came out with a ruling that upheld my complaint and put CGTN on notice that it would face statutory sanctions such as fines or the stripping of their licence”.

He says at every stage the broadcasting regulator dragged its heels and the process took far longer than it need have done.

Peter describes the way in which Chinese state TV gained access to broadcasting in Britain as “fraudulent”.

“Somehow a license was issued for CGTN about 17 years ago and it was obtained fraudulently. This is the only case I know of such a thing happening in Ofcom’s remit where a licence was obtained for a major broadcaster from a foreign country by fraud. And by fraud, I mean they did it through a third party [Star China Media Limited], why did they do that? Why did they have to do that?

“It is really disingenuous if China says: ‘Britain knew all along who we were, who CGTN was … that’s nonsense”.

The onus was on Ofcom though, says Peter, to have investigated the company more thoroughly.

“It’s not rocket science to do basic checks on the ownership of a legal entity and that’s something I think needs to be brought to the floor of Parliament because Ofcom have… messed up somewhere along the line by not seeing through this ruse when they issued the licence.”

“I was thrilled that CGTN’s licence was stripped. And I’m thrilled it was stripped as a result of my efforts. I wasn’t alone, there was several other people who filed complaints too, to shine a spotlight on CGTN being an arm of the Chinese dictatorship.”

Image above: scenes at one of Hong Kong’s pro-democracy protests

One month after Peter’s complaint was filed, Angela Grey filed a complaint. Angela is the daughter of a prominent Chinese dissident publisher, who was detained in China and convicted, after their decision to publish books about Chinese leaders.

After Angela’s complaint there were several others, including Peter Dahlin, a human rights activist from Safeguard Defenders, whose complaint concerned his own forced televised confession. Two Hong Kong visitors involved in publishing and book-selling also filed complaints. Only Peter’s and Angela’s complaints were accepted by Ofcom for official investigation.

Safeguard Defenders also published further informal complaints on its own initiative regarding CGTN’s coverage of the Uighur situation in Xinjiang and protests in Hong Kong. In May 2020, Ofcom issued a ruling holding CGTN guilty of violations of the broadcasting code of conduct in its coverage of Hong Kong’s unrest.

A man who worked in the UK consulate in Hong Kong  put forward a complaint which Peter describes as yet another brutal case. This man had been abducted at the border of Hong Kong, taken and put in a detention centre and forced to appear in front of TV cameras, who he says tried to make it look like he had been soliciting prostitutes.

“What they were trying to do was sully the UK and the UK consulate and to allege that he was some kind of key person in the Hong Kong pro-democracy protests”.

Images above: Chiswick Business Park, where CGTN are based in the UK; photographs Jennifer Griffiths

CGTN in December 2019 devoted a half-an-hour programme to Peter, which he describes as a “character assassination”. The programme was aired in response to investigative reports he published in The Sunday Times exposing the use of forced prison labour in the manufacture of commercial products and brands, inside the prisons.

The same month, Tesco had suspended production of charity Christmas cards at a factory in China after a six-year-old girl found a message from workers inside one. The note, found by Florence Widdicombe, was allegedly written by prisoners in Shanghai claiming they were “forced to work against our will”

“It read ‘please contact Peter Humphrey at the FT’ or something like that, I didn’t work for the Financial Times but I had written a story for the FT a few years ago. The girl’s father contacted me, found me, he tracked me down and showed me this so that set me off on the task of writing an exposé” says Peter. “I spoke to sources from around the world including some prisoners who had recently been released from this prison – some of them actually witnessed or participated in packing these Tesco Christmas cards.”

CGTN, a week later, launched the “blistering character assassination” on Peter in retaliation to these articles and so he placed a fresh complaint to Ofcom in January 2020 about the programme. Ofcom have told Peter they are still considering what to do about this specific complaint.

Help from an MP 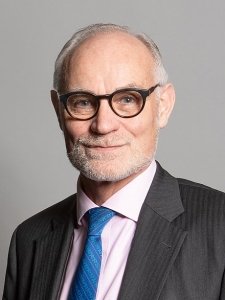 It’s thanks to the support of his MP Crispin Blunt, says Peter, that the complaint was resolved.

“I wrote to my MP, Crispin Blunt, who asked me to flesh things out into a more detailed briefing and he said he would submit it to Ofcom through a ministerial committee. You could say my MP was putting a gun to Ofcom’s head because within two weeks they issued that ruling. I guess they wanted to avoid being hauled in front of parliament or a parliamentary committee.”

See also: Raw sewage in the Thames is ‘unacceptable’

See also: Over 70 and not vaccinated? Contact the NHS

Win a copy of Lucy McMurdo’s book ‘Chiswick in 50 buildingsR...
Scroll to top