“It was really difficult narrowing down which three buildings to illustrate”, explains Lottie, “ but of all the art I sell, these three seem to be the ones people love.”

The cards printed on recycled 300 gsm watercolour card illustrate Chiswick House, Chiswick Tube Station and Turnham Green church. They can be bought individually or in boxed sets of 10 or 20 which includes a small Chiswick pin to wear.

“It just makes my art a bit more affordable for people,” Charlotte explains, “ I think lockdown has created a resurgence in sending cards, a handwritten note means so much more to people right now. A simple message, however short, is always well received and definitely more thoughtful than a text or email.”

Postcards have been an inexpensive way to keep in touch for over 150 years,  as can be seen in an exhibition at The Postal Museum.

Wish You Were Here explores chronologically the many uses and repurposing of postcards, revealing what a democratising media they have always been – they were the text messages of their day – with around 1 billion being sent a year by the start of the First World War.

Postcards were a crucial way for families to keep in touch during both world wars. There are touching displays of messages being sent from homesick soldiers on the frontline as well as official postcards from agencies keeping families informed of the whereabouts of their loved ones, who might be missing in action, confined to a concentration camp or have been killed.

Collecting became a national obsession – encouraged by publishers who produced series, indeed Chiswick Town hall was, for many years, the home of a popular West London Postcard group.

LtoR Coco Fennell/Emily May postcard dress modelled by @knots_uk; The Things She Thought and Didn’t Say Were Many” by Francesca Colussi Cramer

Although less used than in their Edwardian heyday, postcards still inspire contemporary artists, such as Emily May, who paints their images and messages in watercolour. Her work has been printed on fabric and made into this postcard dress designed by Coco Fennell, (sister of Emerald, the Hammersmith-born Oscar winner this year for Promising Young Woman). The postcard above right, intriguingly called The Things She Thought and Didn’t Say Were Many” was created by Francesca Colussi Cramer who uses postcards as the canvas for her embroidery, adding colour to a monochrome landscape or abstraction to a familiar scene.

During the pandemic, postcards have been put to good use with charitable initiatives benefiting from their cheap and cheering potential.

Art on a Postcard work with the world’s leading artists, including long time Chiswick resident Peter Blake, to raise money for the Hepatitis C Trust. Fine art postcards have also been donated by galleries and stamps from The Postal Museum to prisons so that prisoners could correspond with loved ones.

And we’d like to give a big High Five to Nina Andersen, a Sixth Form student at Latymer Upper School in Hammersmith, who initiated a correspondence project and was recently named ‘Covid-19 Champion’ at the Hammersmith & Fulham Youth Achievement Awards 2021. 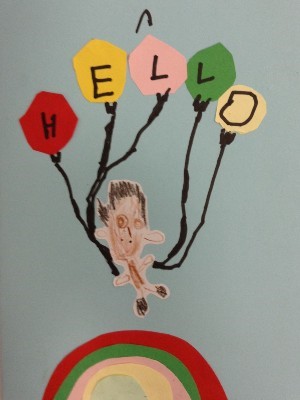 Nina was recognised for Community Senior Letters, a non-profit community project that she set up that matches schools to care homes. Students  write to elderly residents, giving them some form of human connection to ease feelings of isolation which had been exacerbated by the lock downs.  Over 250 care homes and over 250 schools, including Chiswick’s own Cavendish Primary School and Belmont Primary School,  in the UK and internationally, have got involved, writing hundreds of thousands of letters.

You can find Charlotte Berridge, who also makes a range of Chiswick Pub postcards, at Gunnersbury and Chiswick House’s monthly artisan markets.

Knots UK is a hair accessory enterprise based in Central London but inspired by women around the world.