A sculpture celebrating the Nobel Prize-winning Irish poet WB Yeats, has reached its target of £136,439 and is now scheduled for completion in June 2022.

Artist Conrad Shawcross was commissioned to create a design for a piece of art work and organisers, led by poet and broadcaster Cahal Dallat, have already received planning permission from Hounslow planning officers. A page on the crowdfunding platform SpaceHive was set up in February to raise funds, attracting support from high-profile celebrities, local residents and arts organisations.

The sculpture of Yeats, who lived in Bedford Park with his family as a young man, is planned to go outside St Michael & All Angels’ Church, on the corner of Bath Rd.

A significant contribution was made in the final days of the campaign by Dukes Education, which owns the Chiswick and Bedford Park and Orchard House schools, helping the project to reach its target just before Tuesday’s deadline.

‘All of us are pleased that children will see, on their way to school, such a vivid and public reminder not just of another local schoolboy who went on to write much-loved poetry and win a Nobel Prize, but of how Bedford Park’s atmosphere of culture and creativity fostered, and continues to foster, young people’s development.

‘We are excited to see this amazing artwork come alive in the community. We look forward to working with the project on this great celebration of literary and visual arts, now and in the future.’ 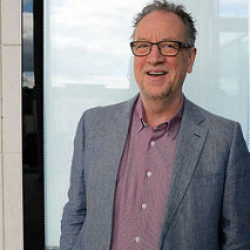 Organiser Cahal Dallat, who is himself a poet and a resident of Chiswick, told The Chiswick Calendar:

‘I’m so grateful, our supporters in this process have been amazing. I always knew we could do it, but even still the last few days have been really exciting knowing that we can now finally get things into action.’

The Chiswick Calendar gets a special mention from Cahal, for promoting the fundraising early and often. Although the original crowdfunding deadline of 11 May was extended due to delays at the planning stage, the two-month extension had given the project committee more time to have conversations surrounding the project’s “Phase Three” which begins almost immediately.

Dallat told the Chiswick Calendar that he would be meeting with Shawcross and their engineering partners on Thursday to organise the groundwork contracts. The sculpture is scheduled to be unveiled on Monday 13 June 2022 as a celebration of the poet’s 157th birthday.

Dallat has also outlined a complete education/arts/heritage experience wrapped around the artwork as focal point attracting visitors, local and international, adults and children, to ‘Discover WB Yeats in Bedford Park’.

The unveiling will also see the launch of a smartphone/app version of the long-running Land of Heart’s Desire literary walk (with Google directions, images, info, talks and Yeats readings by celebrity actors), educational Yeats-poem workbooks for children, families and school-parties, plus future poetry readings and talks, and a promotional video telling the world the Yeats/Bedford Park story through Conrad Shawcross’s artwork and Bedford Park’s history and legacy.

Images above: Conrad Shawcross; artists impression of the sculpture

Dallat explained to The Chiswick Calendar that the WB Yeats Bedford Park Artwork Project didn’t want a statue of the great writer, but rather an art work that captured his spirit and illustrated how growing up in Bedford Park had inspired him.

Called Enwrought Light, by Conrad Shawcross, it was the line from Yeats’ poem He Wishes for the Cloths of Heaven which caught the artist’s imagination, in particular the lines:

Image above: 3 Blenheim Road in Bedford Park, the Yeats’ family home from 1888 to 1902; W.B. Yeats portrait by George Charles Beresford

See also: Top Ten things to do in Chiswick

Meet the Makers – Made Kind
Scroll to top