Fiona Crumley, Head Gardener of the Chiswick House and Gardens Trust between 2007 to 2013 has died peacefully at home after a long battle with cancer, aged 58.

Fiona worked as a gardener straight from school and enjoyed a distinguished career in horticulture. She studied for a vocational qualification in Amenity Horticulture at Askam Bryan College, York in the early 1980s and then worked as a gardener at Newby Hall in North Yorkshire before landing the plum job at the Chelsea Physic Garden, twelve of those as the first female Head Gardener of this leading London garden. “She was the heart of the garden,” says Ruth Stungo who worked with her there for many years.

At Chelsea she built up a warm and supportive team, even accompanying one staff member to the maternity unit after she realised the husband was away on a business trip; she stayed during the birth and became godmother to the baby. The baby then became bridesmaid when Fiona married Jeremy Garnett, a surveyor who would become deeply involved in garden history.

Fiona started work at Chiswick House as it was entering a difficult time. The London Borough of Hounslow had responsibility for the gardens, which were run down, and English Heritage looked after the house. A nationally important camellia collection was in a poor state in the dilapidated conservatory, covered in scale insects with yellowing leaves, poorly maintained for years. A Heritage Lottery grant of many millions of pounds had been awarded and the management of house and gardens was to be unified and transferred to the new Trust. The renovation of the gardens was to be Fiona’s responsibility, based on plans that would see substantial change, with trees removed, hedges relaid, paths resurfaced, the old café demolished, roadways reconfigured, the conservatory restored around the camellias, the Kitchen Garden brought back into cultivation. A fierce rearguard action against some of the changes had been fought by local park users (including me).

Fiona sailed serenely through some very trying years. She seemed to be responsible for almost everything, from blocked loos to irate dog walkers, bureaucratic hiccups and funding crises, as well as the purely horticultural decisions. For the first few months she simply listened and observed, before quietly proceeding with the transformation of the gardens. If she couldn’t go through obstacles she quietly went around them. “She had a wonderful capacity for listening to everybody, calming the situation, bringing people together,” said one of the Chiswick volunteers. “She always had time for everybody.”

Her horticultural knowledge was outstanding, and it is to her credit (as well as that of her worthy successor as Head Gardener) that Chiswick has again rightfully taken its place as one of the country’s great gardens. The camellias were saved, refreshed, and new cuttings propagated, newly framed within the beautifully restored conservatory. The Financial Times even dubbed her ‘The Lady of the Camellias’.

Fiona held many important roles within the world of horticulture. She was secretary to The Merlin Trust, which offers grants to young horticulturalists, and travelled with Jeremy to many parts of the world to look at gardens, as well as the native flora and fauna. She was an important member of many horticultural organisations including the Professional Gardeners Guild, the Worshipful Company of Gardeners, the London Gardens Network, and Plant Heritage. For the Royal Horticultural Society, she sat on the Bursaries Advisory Committee and also judged prison gardens. For several years after leaving her formal role at Chiswick House and Gardens Trust she sat on the advisory panel. 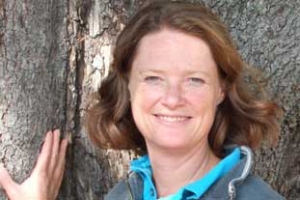 On a personal level it was always a joy to deal with Fiona. I was running the Kitchen Garden at Chiswick House when she arrived, where we had been leading a fierce battle to retain the walled gardens as a productive growing space – the original plans had been to make the area a retail centre and car park for corporate entertainment. Instead of considering us as difficult opponents (as the Director of the Trust at the time did), Fiona gently modified some of the harsher edicts when she found them unreasonable and welcomed us as a vital community organisation with an important role. Our missions of educating children and members of the community in horticulture and food growing chimed with her own aims for the walled gardens. She helped us to continue and thrive in the face of considerable establishment opposition and we felt we had a quiet defender and supporter.

While never showing off her superior knowledge, she offered growing advice – I remember a workshop she gave us on successful composting that resulted in us hunting the streets for discarded estate agents’ boards to protect our composting bacteria and worms.

She was a warm, welcoming, knowledgeable and intelligent friend to those who cared about the Gardens. Her serene and smiling presence will be sorely missed by everyone who came into contact with her.