Madeleine is an American married to an Englishman, who has lived in Chiswick for several years, as well as spending time in New York, Los Angeles and Chicago, where she grew up.

Image above: Celebrations outside the White House in Washington DC 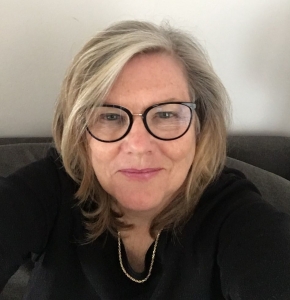 I called my sister, in Chicago, and she excitedly blurted out that Biden had been declared the winner. Of course, the minute I took a break from my mind-numbing three-day vigil, waiting for the results of the U.S. presidential election, I’d missed the announcement! However, to put it mildly, I was ecstatic; we screamed and yelled in relief and release from the drip-drip of vote-counting suspense.

I began to hear the noise of thudding fireworks here in Chiswick.

Then, my daughter in New York City texted that people were dancing in the street, honking their horns, and gathering to cheer Biden’s victory. She wrote:

“It feels like liberation…there is some hope…we’re so happy, it’s amazing!”

As an American living in London, sharing the world’s doom-laden political and pandemic anxieties, this election result was good news for me. As the news reverberated in my head, I heard more loud fireworks. Things started to take on a surreal, party-like atmosphere.

My London neighbour and her daughter rapped on my door, hilariously blasting the “Star Spangled Banner”, the U.S. national anthem, on their phone. We enjoyed a moment of socially-distanced doorway solidarity. Smiles and happiness.

Another text from a friend in Connecticut: “You must be so relieved, and as an American living abroad, it will be easier, because our leader will no longer be a joke!”

(Yes, my American accent did often elicit a discussion of why and how Americans could have elected Trump, with his glaring faults and complete unsuitability for governing.)

Another text from a Florida relative; she was delighted that some Republican friends had voted for Biden because they could not stomach the incumbent’s “immature and repellant political behaviour.”

Finally, as more fireworks were whistling and booming out, I texted my mother, also in Chicago:

“Fantastic news about Biden’s victory. Lots of fireworks here in Chiswick! I’m celebrating the fireworks as, “Biden Won”, but actually, they are in honour of Guy Fawkes Day, the 1605 plot to blow up Parliament!”

So different from when I arrived in 2016, returning to live in Britain for a second time. I remember then being mortified when Trump won the election and seeing on a noticeboard outside a pub in Hammersmith:

‘All Americans must be accompanied by an adult’.

See also: Thanks Your Majesty! – a guest blog by journalist Julia Langdon

Lockdown things to do – Mark 2
Scroll to top